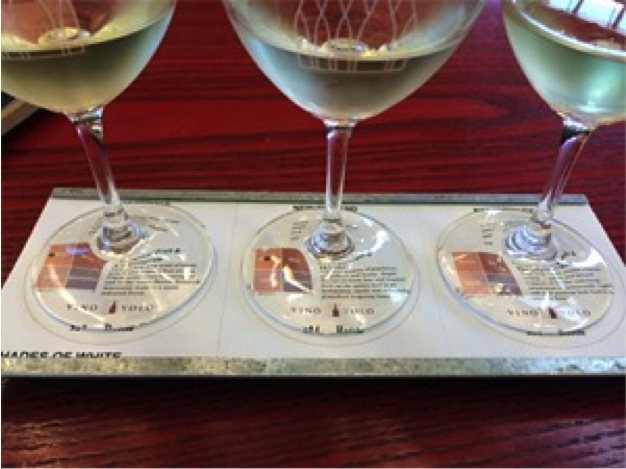 I arrived early for my flight from John Wayne Airport, and had some time to kill. So, after the usual smart phone emailing and texting, I decided to get my legs ready for a long flight by walking the length of the waiting area once or twice. As I approached Gate 12, there was a large vineyard mural on the concession just in front of me. Since I was going to a wine region (Cahors, France), I decided to take a picture of the mural and send it off to my friends, implying that I’d already arrived at my destination. Task finished, I walked a little further, only to discover the true purpose of the mural. John Wayne Airport has a wine bar called Vino Volo.

Vino Volo is apparently a national chain with more than two dozen locations, including several in airports—an opportune place to have a glass of wine prior to boarding or even upon arrival. The wine list has some nice offerings and good depth of both varietal and style.

In addition, they have a program that deserves some special mention: It offers flights of wines of comparable styles and colors. If you’re not familiar with the concept, it’s very simple. Instead of ordering one 6-ounce pour of, say, chardonnay, you can get three 2-ounce pours of: an albariño, a sauvignon blanc, and a chardonnay. With three wines, you’re able to compare and contrast each style of wine. The place also offers small food plates to accompany your wines, such as olives, smoked salmon, and cheese.

The presentation is very nice. The three glasses arrive on a narrow metal tray with individual educational notes visible under each glass. In addition, the server asks if you’d like to hear a brief explanation of each wine. At $11, the pricing is very reasonable for the flight of whites I tried, called “Shades of White.” It was just one of several flights from which to choose.

So, the next time you’re at SNA early for a flight, pop in and check out Vino Volo’s wine list. You may find it’s the perfect departure gift for yourself.