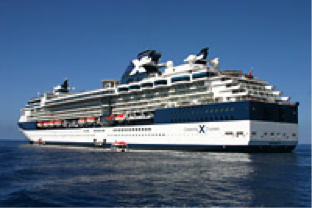 We’ve got plenty of chances to relax and vacation at sea around here, especially with so many cruise ships scheduled into and out of the nearby ports of San Diego and Long Beach/Los Angeles. Is it kosher to bring your own wine to enjoy on the voyage? The answer is a qualified “yes,” but it also depends upon the cruise line.

Much like restaurants, cruise lines have differing policies on BYOB. In some cases, there is a limitation; in other cases, additional bottles are allowed, but incur corkage fees. Here are guidelines for six of the major cruise lines, along with links to each specific policy.

• Princess – Limited to one 750 ml bottle of wine per adult, to be consumed in the stateroom with no corkage fee. Thereafter, additional bottles are welcome, but will be assessed $15 corkage, regardless of where the bottle is consumed. So, no real limit, per se, but it will cost you in corkage fees each time another bottle is opened.

• Royal Caribbean – Limited to two 750 ml bottles of wine per stateroom, to be consumed in the stateroom with no corkage fee. Consuming in a public area will incur a $25 corkage fee. Additional bottles beyond the first two will be stored by the ship, and delivered back to you on the last day of sailing. So, a very real limit that would seem difficult to bypass.

• Celebrity – Limited to two 750 ml bottles of wine per stateroom, to be consumed in the stateroom with no corkage fee. But it’ll cost you a $25 corkage fee to consume it in a public area. Additional bottles beyond the first two will be stored by the ship, and delivered back to you on the last day of sailing. Again, a limit that would seem difficult to bypass.

• Norwegian – No limitation is stated. However, when bottles are brought on board and served or consumed in any restaurant, public room area, or in the stateroom, a corkage fee will be charged according to bottle size: 750 ml, $15; 1,500 ml magnum, $30. So, there is apparently no limit on number of bottles brought aboard. However, corkage fees will be assessed for consumption in all locations, including your stateroom. Wine or Champagne sent directly to the ship by travel agents, friends, or family, or from another retail source, are subject to the same fees. Interestingly, box wines are specifically mentioned as not being allowed on board.

• Holland America – Guests can bring as much wine and/or Champagne as they choose on board at embarkation or purchased in port. A corkage fee of $18 applies to wine and Champagne brought to the shipboard restaurants or bars for consumption. Wine and/or Champagne brought on board cannot be consumed in any public venue. If a guest is drinking a beverage carried on board and in a public venue, they will be asked to return it to their stateroom. Now, that’s a liberal policy!