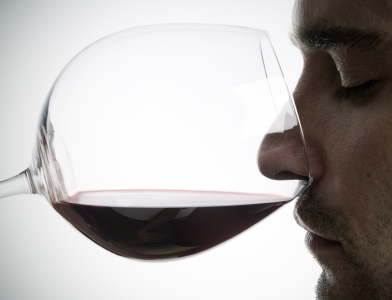 It’s a humbling thought for those who evaluate wine as an amateur or professional: Compared to other mammals, humans have a pretty poor sense of smell. A dog can distinguish between the smells of clothing worn by non-identical twins (identical twins produce the same scent). Our nasal (olfactory) receptors at the top of the nose, which capture molecules floating in the air, cover just one fifth the area of that found in cats.

As for discriminating between numbers of aromas in a complex liquid, such as wine, we are not very good at it. Humans can only identify a maximum of four odors in a mixture; something to keep in mind next time you read a flowery tasting note that touts multiple aromas in the wine.

A recent article in the Journal of Nature Neuroscience (17: 114-120, 2014) from researchers at Duke University School of Medicine states that humans have about 400 intact odorant receptors, but each individual has a unique set of genetic variations that lead to differences in olfactory perception. About 30 percent of the odor receptors are different between two people. In other words, no two people smell things the same way.

The human tongue and palate can perceive five tastes: sweet, salty, bitter, sour, and umami (a Japanese term that translates loosely as “meaty” or “savory”). We vary the most in our tolerance of bitterness in wine. Also, with wine, there is a textural component to taste, a stinging sensation when something is spicy or fermented. Wine tasters are trained to recognize flavors in wine and describe them, but they are not physiologically endowed with special powers or sensory superiority.

Gary K. Beauchamp, Director of the Monell Chemical Senses Center in Philadelphia, said in The Wall Street Journal Oct. 22, 2013, “Take your genetics plus your experience, and we are all living in our own sensory world.”

His advice concurs with mine: drink what you like and like what you drink, and don’t be shy about your personal wine preferences. Your taste is your patrimony.