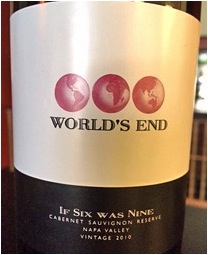 Englishman Jonathan Maltus is a force to be reckoned with. He came to prominence during the garagiste (garage) movement, which grew up around the village of Saint Emilion during the 1990’s. The movement’s goals were in direct response to the traditional style of red Bordeaux wine, which is usually very tannic and requires a long period of aging in the bottle before drinking. The garagistes developed a style more consistent with perceived international wine tastes, fueled to a large degree by wine critic Robert Parker’s reviews. During this period, garagiste winemakers competed with each other to make wines that were modern in style, with higher levels of fruit and alcohol. The techniques used—including double sorting of fruit, lees utilization, and gravity transfer—has become almost de rigueur today, for any Cru Classé Estate.

Still making wine in St. Emilion at Château Teyssier, Maltus now also produces wines from Napa Valley under the World’s End label. The label’s name is a dual nod to both Old World winemaking influences, and an old-map view of the New World—you know, back when the world was flat. The wine’s name is an homage to “If Six Was Nine,” a 1967 song written by Jimi Hendrix.

The cabernet sauvignon that makes up this wine comes from the vineyards of Andy Beckstoffer, which also provide fruit for several cult wines. Cabernet grapes from the lower slopes of Coombsville are blended with those from Sugarloaf Mountain’s west- and south-facing slopes, and from Circle S up in the highest part of Napa. The consulting oenologue is Gilles Pauquet, who also works with Chateaux Cheval Blanc, Canon & Figeac. The winemakers are Jonathan Maltus and Neil Whyte. It might be French-inspired, but as you can see, it’s all Napa.

About now, you’re probably wondering what the heck the wine tastes like. Well, the nose is firmly packed with black cherry, along with light bittersweet chocolate, vanilla, and toasty accents. The mouth has succulent flavors of off-sweet rich black cherry fruit, and the wine is nicely balanced with a slight grip on the palate from the seamless fine-grained tannins. This is delicious now, or you can save it for five years or more. This cab will easily pair with steaks, ribs, or roast chicken. At Wine Exchange, Hi-Time Cellars, and Best Wines Online, for about $40.