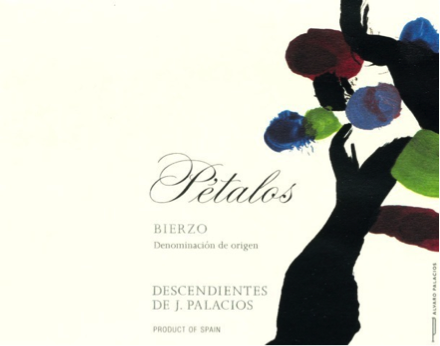 Alvaro Palacios is considered a pioneer and visionary, no small feat in Spain, one of the oldest wine-growing regions in the world. Alvaro was brought up in the family wine business in the Rioja region. After spending two years in Bordeaux at Château Pétrus under Jean-Pierre Moueix, Alvaro founded his own winery in Spain’s Priorat region in 1989.

After essentially “conquering” the Priorat in 1998, Palacios and his nephew Ricardo Perez began making wines from small, old-vine vineyards in Bierzo, another part of Spain.

Here, in Bierzo, which is tucked into the northwest part of the country, it is the Atlantic Ocean rather than the Mediterranean Sea that had a cooling influence on the native mencía grape. Probably a descendant of Roman vines, the mencía grape was thought to be an immediate ancestor to cabernet franc. There are about 60 acres of old vine mencía (60 to 100 years old) spread over two separate sites, and 128 different blocks in Bierzo.
The Petalos wine is deep in color, smelling of smoky dark raspberry fruit, some sweet herbs, and a hint of bittersweet chocolate. It’s filled with flavors of black cherry, anise, mineral, and wood-fired smoke, and there is a creamy and juicy texture on the palate and through the long finish. The wine spent 14 to 18 months in barrique (59 gallon barrels). This is a stunning wine for the price of $18. At Best Wines Online, Wine Exchange, or Total Wine, Tustin.