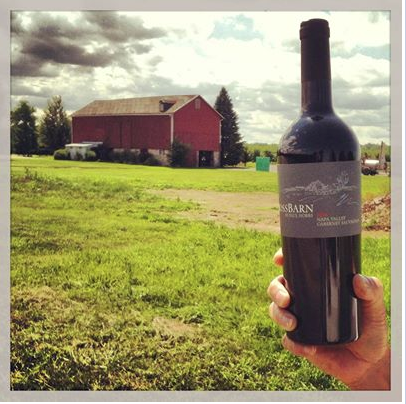 The inspiration for CrossBarn comes from the Hobbs family’s 150-year-old farm in upstate New York. A “crossbarn” nestled in the middle of the property was a favorite haunt for Hobbs and his siblings.

The 2012 CrossBarn Sonoma Coast Pinot Noir was produced from grapes harvested by hand at night, then underwent both native and inoculated yeast fermentations. After aging 10 months in 10 percent new oak barrels, the wine was bottled unfined and unfiltered under screw cap.

The wine offers a welcoming nose, with aromas of black cherry pie, black raspberries, and weathered oak. The middleweight flavors of cherry cola, dark raspberry, and spice are pleasing, and the velvety mouth feel is enticing. Pair this forward-drinking wine with a pulled-pork sandwich, bison rib eye steak, or braised duck with mushrooms.

This is an impressive offering from an excellent vintage, modestly priced at $35. With 10,000 cases produced, the wine is widely available, including totalwine.com, wineclub.com, and ocwinemart.com. The 2012 CrossBarn Anderson Valley Pinot Noir, also $35, is an equally satisfying choice.