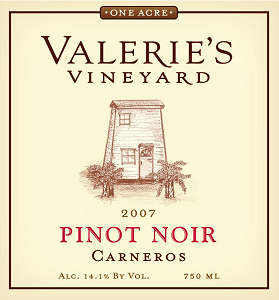 Forget small production, we’re talking tiny here, as in 58 cases of this wine, lovingly sourced from a 1-acre vineyard in the Carneros region of Sonoma County. The vineyard is a group-managed affair, a partnership between Chuck Hanson, primary wine buyer for Costa Mesa’s Hi-Time Wine Cellars, who joined the retailer shortly after it opened in 1957, his wife, Jerry, their daughters Vicki Brown and Valerie Coats, and Valerie’s spouse, Michael. Originally planted in 2000, the organically farmed vineyard’s first release was in 2003.

B.R. Cohn Winery’s winemaker, Tom Montgomery, crafts the wine, which is aged 18 months in new and seasoned French oak. I found it to have an intriguing nose, with scents of dark red berries, black pepper, earth, and coffee. It hits the mid-palate with flavors of blackberries, plum, cola, mushroom, tobacco, and spice. Beautifully crafted, with a seamless character, it’s plush on the palate, with well-proportioned tannins, and a long, long finish. Enjoy it with barbecued pulled-pork sliders, spiced-rubbed beer-can chicken, or practically anything with bacon. Expect the 2011 vintage will be released soon.