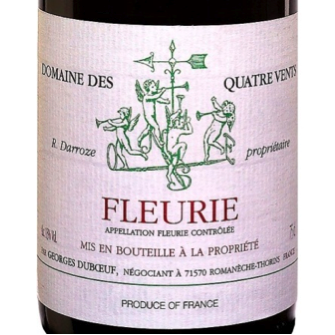 “And now for something completely different,” to borrow a line from Monty Python. Actually, this Beaujolais is not really that different—it IS wine, after all. It’s just that it may not be something you’ve tried before. And if not, you’re really missing out on something!

The Duboeuf Fleurie Domaine des Quatre Vents (“Field of the Four Winds”) is from the Beaujolais (Bo-jho-lay) sub-region in Burgundy, France. Unlike other red Burgundies made from the pinot noir grape, the wines of Beaujolais are made from the gamay grape. This generally produces a wine that’s much more fruit forward, less tannic, and even a bit lighter in body. This wine is from the Fleurie commune (it’s own AOC), and is called a Cru Beaujolais, which is a higher level of quality than village wines.

The wine is brimming with beautiful dark red cherry and currant fruit, both in aroma and flavor. The balance on the palate is impeccable, and the tasty fruit-filled finish cries out for Brie, Camembert, or almost any soft cheese. Assuming there will be some left for dinner, the wine pairs well with pasta dishes, chicken, turkey, duck, even salads. It’s capable of aging for several years, but I think it’ll be difficult to keep your hands off the bottle now. About $15, available locally from The Wine Club, Best Wines Online, or Wine Exchange.