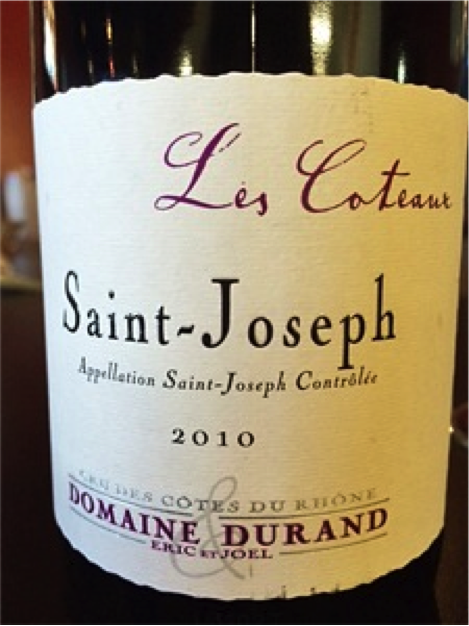 It’s no accident that most “old world” vineyards sprang up along the rivers of Europe. Aside from nourishment, rivers were the means for transporting the wines to other regions and countries. The Rhône River is one of the great waterways of Europe, beginning in Switzerland and running through the Rhône Valley of southeastern France to the Mediterranean Sea. Its viticultural areas are separated into the Northern Rhône and the Southern Rhône, with several appellations in each region. This week’s wine is from the Northern Rhône, from a commune named Saint Joseph (San Jo-SEFF), which has its own appellation, or A.O.C.

The St. Joseph A.O.C is on the right bank of the Rhône, and to me produces junior versions of the much more famous, and pricey, wines from Hermitage, which is on the other side of the river. “Les Coteaux” comes from the southern end of the appellation near Châteaubourg. It’s 100 percent syrah, harvested from 13 hectares on predominantly granitic slopes. Only 1,800 cases were made. Brothers Eric and Joel Durand of Domaine Durand have been crafting acclaimed wines from the region for several years.

The color alone is gorgeous, an inky purple/black cherry hue. The nose brims with aromas of black cherry, smoke, anise, and pepper. On the palate, it’s surprisingly approachable, with plenty of fruit to round out the well-hidden tannins. Flavors of lightly spiced dark berry, and savories like anise and sage complement each other, lingering long on the persistent finish. If you’re really into the fruit aspect of a young wine, try it. On the other hand, if you prefer some bottle age to add tertiary character, give it another five years or so. Either way, you can’t lose. I would pair it with grilled meats or stews, and it will have a definite affinity for lamb.

At Hi-Time Cellars, and Wine Exchange, for under $30.