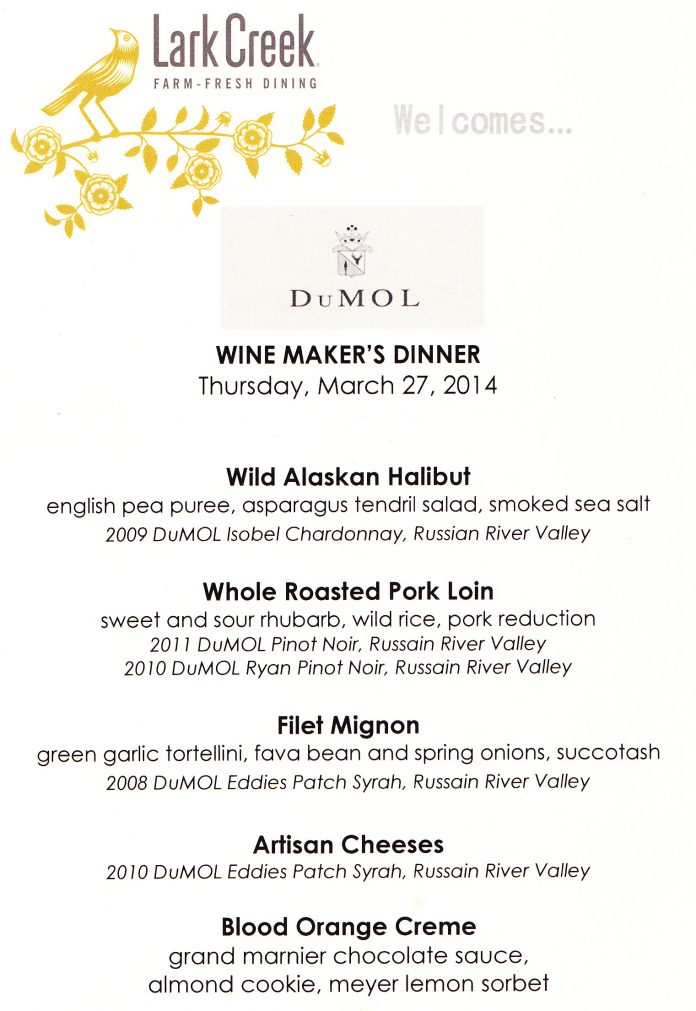 As a wine writer, I attend many winemaker dinners each year in California and Oregon, but the inaugural one with DuMOL’s Andy Smith at Fashion Island’s Lark Creek Newport Beach March 27 was one of the most memorable. Winemaker events have always been a Lark Creek signature, and this private dining experience exceeded expectations. My only regret is that I didn’t win the magnum of DuMOL that was awarded by lottery to one lucky diner.

Chef and partner John Ledbetter chose DuMOL as the restaurant’s first featured winery because its consistent stylistic vision and high-quality wines perfectly complement the restaurant’s farm-fresh cuisine. He presented a special five-course meal perfectly paired with a sampling of DuMOL varietals and vintages, sustainably grown in Northern California’s Russian River Valley. The menu was impressive for its wine compatibility, and each dish was simply prepared to show off each wine’s character.

John is an Orange County native and a graduate of the California School of Culinary Arts. He worked at a number of well-known restaurants across the country, including Emeril’s with chef Emeril Lagasse, before returning to California to join the Bay Area’s Lark Creek Steak where he was promoted to head chef after a few months.

General manager Chad Sisco, a veteran of the Orange County restaurant scene, oversaw the evening, insuring that the meal was well paced and the wine and food service was impeccable. The private room, which comfortably accommodated 25 attendees, was stylish. Chad says that in the future, the restaurant will host intimate winemaker dinners about every two months.

DuMOL’s Andy Smith conducted his hosting duties with humor and panache. A Scot, who developed a love of wine working in a wine store while in college in the U.K., he earned the name “Fast Andy” for his ability to quickly carry cases of it upstairs from the cellar. After honeymooning in Napa Valley, he was inspired to become a winemaker. Educated in New Zealand, he was mentored by Neil McCallum at Dry River in Martinborough, and later moved to California to work with Ted Lemon at Littorai, and Paul Hobbs in the Russian River Valley. In 1999, he joined DuMOL, and quickly thrust it into the upper echelon of California boutique wine producers.

Today, DuMOL produces about 16,000 cases of ultra-premium pinot noir, chardonnay, viognier, and syrah from individually farmed vineyards in the Green Valley of Russian River Valley appellation. Its wines are snapped up by a dedicated cadre of mailing list members. For more information, visit www.dumol.com

At Lark Creek Newport, wines are offered by the glass and the half glass, and protected under optimal temperature conditions by a blanket of inert gas. A selection is also available on tap. As a pinot geek, I’d be quite happy with the choice of 17 pinot noirs offered from top California and Oregon wineries.
The restaurant is located below Island Cinema and is open for lunch, dinner, and happy hour seven days a week. For reservations, call 949-640-6700, or visit www.larkcreeknb.com. Read Gretchen Kurz’s review of Lark Creek Newport Beach here.