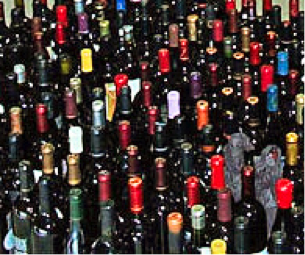 I was having dinner with some wine friends the other night. You can imagine what we continuously talked about. And, as often happens, the conversation turned philosophical. So, knowing that I’ve been buying wines for some 30 years, one of my friends had a salient question for me. If I had it to do over, would I do anything differently? For instance, did I wish I’d bought more or less wine, and what would those wines be? He also asked what advice I’d give others about buying wine. They were interesting questions—ones I had reflected on before, but not for very long and only to myself.

In an effort to give a reasoned answer, I described (perhaps as much to myself as to him) that I began in the early ‘80s buying and drinking Bordeaux, first Left Bank, then Right Bank wines. My preferences then evolved (some might say DE-volved) into California cabernet and merlot. From there, I soon became interested in California syrah, dabbled in Australian shiraz and Spanish Rioja, and then got fully immersed in California pinot noir. And, merely to bring this metaphoric wine journey up to present day, I got back into Bordeaux, and just recently segued into Burgundy.

I also told him I had always preferred to buy wine in breadth rather than depth. My reasons were twofold: money and space. Lacking unlimited funds, I bought only 1 to 3 bottles of each wine, rather than investing in several. My goal was to try as many different wines as I could. To me, the whole wine hobby was actually a figurative, if not literal, journey. As for storage, more wine meant I had to rent a wine locker, rather than keep the wine at home. This equated to even more money.

Mindful of this, it was now time to offer some sage advice. I told him to be prepared for his tastes to change or evolve with time. Don’t buy anything too deep, I suggested. I also emphasized that while I did indeed regret drinking each and every 1- to 3-bottle collection of 1982 Bordeaux, I also long ago resolved that I couldn’t buy every wine I had a desire to own, in sufficient depth to last my lifetime. “But I want to, I want to buy it all,” he said, with a wistful yet understanding smile. To which I replied, “Then you’re going to need more money than Bill Gates. Oh, and, to paraphrase Martin Brody in ‘Jaws,’ ‘you’re going to need a bigger boat!’ ”