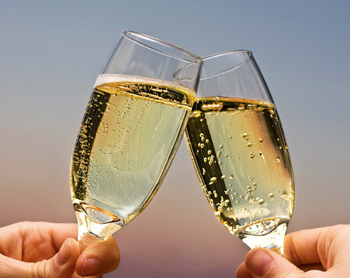 After a number of years in which California sparkling wine was a hard sell, a number of boutique pinot noir producers offer superb examples that have retrieved the state’s sparkling wine industry from the doldrums and “sparked” a mini-trend.

These small production wines are only available directly from the wineries. They’re moderately expensive, rivaling prices of some of their French counterparts. The cost reflects the high-quality grapes incorporated in the wines, the higher taxes on sparkling wines compared to still wines, and the more intensive winemaking procedures required to make a high-end bubbly using the traditional French méthode champenoise.

Méthode champenoise is centered on the second fermentation that occurs in a sealed bottle. Sugar, yeast, and yeast nutrients are added to the fermented juice, called the tirage, that is put into a thick-walled bottle and sealed with a bottle cap. This tirage is allowed to slowly ferment over several months; the yeast consumes all the sugar and produces carbon dioxide and alcohol. Since the carbon dioxide cannot escape, the sparkle is incorporated into the wine.

Once the secondary fermentation is completed, the wine is placed neck down in special riddling racks to undergo remuage, the slow process of rotating the bottles over weeks to months, to drop the dead yeast deposits into the neck of the bottle. Disgorging the sparkling wine follows, by freezing the neck of the bottle in an ice-salt bath while the bottle is upside down. The carbon dioxide gas in the bottle expels the resultant plug of dead yeast cells when the cap is removed, leaving behind clear sparkling wine. Finally, a mixture of wine and sometimes sugar is added, to adjust the sweetness level of the wine and to top it off; this is called the dosage. The bottle is then corked, and a wire cage is placed over the cork to enable it to withstand the high carbon dioxide pressure within the bottle.

Sta. Rita Hills producer Kessler-Haak offers its inaugural releases known as the “sparkling brut squad,” all made from Kessler-Haak estate Sta. Rita Hills grapes, and consisting of a 2012 sparkling Brut, composed of 75 percent pinot noir and 25 percent chardonnay ($45); a 2012 sparkling Brut Rosé made from 100 percent pinot noir ($45); a 2012 limited edition “Straight Ahead” Brut (only 25 cases, $60); and a 2012 limited edition “No Samba” Brut Rosé (only 25 cases, $65). All four wines are made from Kessler-Haak estate Sta. Rita Hills grapes. The latter two bottles are paired with music CDs from the Kessler-Haak family of jazz musicians. Both wines undergo a 10-month triage. Visit www.kesslerhaakwine.com.

Noted Sta. Rita Hills producer of premium pinot noir and chardonnay, Brewer-Clifton, announces the release of its 2011 3D Vineyard Sparkling Chardonnay ($68), made in a blanc de blanc style. This is the second vintage of this wine made from Brewer-Clifton’s estate-farmed 3D Vineyard. Brewer-Clifton is one of the few producers in Santa Barbara County that not only makes a méthode champenoise sparkling wine, but also sees the entire project through in an estate fashion at its own winery. Learn more at www.brewerclifton.com.

Also based in Sta. Rita Hills, Flying Goat Cellars has offered “Goat Bubbles” for a few years. Three outstanding ones are: 2010 Goat Bubbles Blanc de Blancs Sierra Madre Vineyard ($40); 2011 Goat Bubbles Rosé Solomon Hills Vineyard ($40); and 2011 Goat Bubbles Crémant Sierra Madre Vineyard ($38). I reviewed the 2010 blanc de blanc a few months ago and noted: “A sublime array of flavors including lemon, lime, pineapple, vanilla, and almond with a yeasty accent. This sparkler is entirely satisfying, with bright and cleansing acidity directing a dry, lemony finish that urges you to take another sip. An extraordinary California sparkling wine at a ridiculously modest price considering the quality and work that goes into producing a wine of this pedigree.” Visit www.flyinggoatcellars.com.

A personal favorite of mine is the Brut Rosé “Endless Crush” Sparkling Wine ($68), offered by Inman Family Wines, sourced from the winery’s OGV Estate Pinot Noir in the Russian River Valley region of Sonoma County. The newest offering from owner and winemaker Kathleen Inman is the 2012 vintage that can be ordered now for shipping in February 2014 (think Valentine’s Day). The impetus for creating her first sparkling wine was her 25th wedding anniversary in 2009. “The wine is flush with appealing aromas and flavors of strawberries and cherries, with hints of brioche, roasted nuts, and yeasty lees. It is very dry, with no sugar added in the dosage. This special sparkling wine can hold its own with any fine French Rosé Champagne and is packaged beautifully for celebrations.” Visit www.inmanfamilywines.com.

These unique wines are not just for special occasions. They’re superb aperitifs as well as workhorse food wines that can be paired with a variety of foods throughout a meal.