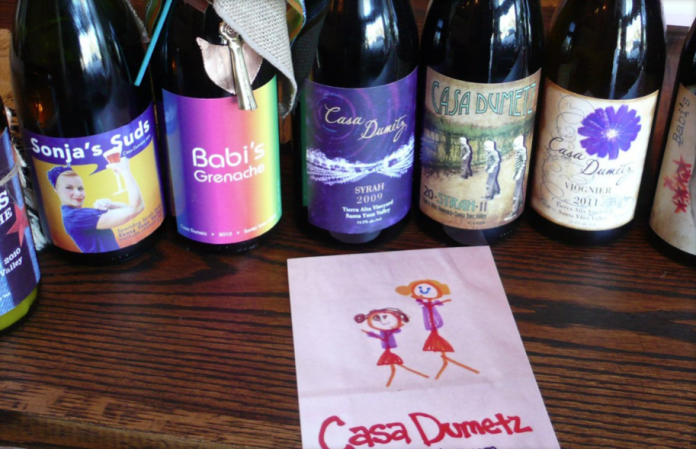 North of Santa Barbara on Highway 101 is the historic town of Los Alamos. If you’re ever nearby, stop in at the Casa Dumetz Winery tasting room, where actor, writer, and director Emilio Estevez and his winemaker fiancé Sonja Magdevski offer their stand-out, and very affordable wines.

Estevez has long been a serious collector of wine, including Bordeaux and Burgundy, but the process became too serious for him, dictating what he drank and when and for what occasion. So he sold the wine collection for a sizeable sum and embarked on producing wines that are casual, unpretentious, and easily affordable.

The name Casa Dumetz reflects his Spanish family heritage. The point in Malibu where he planted his pinot noir, Point Dume, was named after Francisco Dumetz, a Spanish missionary. Estevez’s grandfather was from Spain and was also named Francisco. The actor’s appreciation for wine inspired him to write and direct the film “The Way,” about a wine- and food-fueled journey along the Camino de Santiago (Way of St. James) in Spain. It stars actor Martin Sheen, Estevez’s father, as an American doctor who goes to France after the loss of his son (played by Estevez) and travels the historical pilgrimage along “The Way” to honor his son’s ambition to finish the journey. Sheen’s interactions with other travelers are life-changing for him, and I found myself longing to embark on the same journey after watching this film, which is out on Blue-ray and DVD.

Magdevski holds an undergraduate degree in political science, a graduate degree in journalism, and is a regular contributor to Malibu Magazine. She acquired her winemaking acumen at Santa Maria’s Allan Hancock Community College Viticulture and Enology program.

The boutique winery project was launched in 2004 when the couple dug up the front and back yards of their Malibu farm and planted an acre of pinot noir vines. They tended the vines themselves and the first crop in 2008 made about 50 cases of wine. That first wine was a true garagiste production, using a hand-crank crusher/destemmer, a small basket press, half-ton fermenting micro bins, all in a 20-by-40-foot space. Currently, they are making wine in a cooperative facility in Buellton.

Needless to say, the Malibu Estate Grown Los Angeles County Pinot Noir, which is 80 percent pinot noir and 20 percent grenache, sells out quickly because it’s such a rarity. I haven’t been able to sample it, but I can speak for the winery’s Clementina viognier, a classic for the varietal, with plenty of soaring tropical fruit aromas, and a substantial body of pineapple and mango flavors, with a touch of rum-soaked raisins. It finishes with a good cut of refreshing, citrus-driven acidity ($30). In addition, the winery’s 1,000-case production includes syrah, grenache, and a sparkling rosé from sources in the Santa Ynez Valley. The wines are sold on the winery’s website, casadumetzwines.com, and are reasonably priced (all under $35). The owners welcome inquires at smeee@casadumetzwines.com, or 805-344-1900.