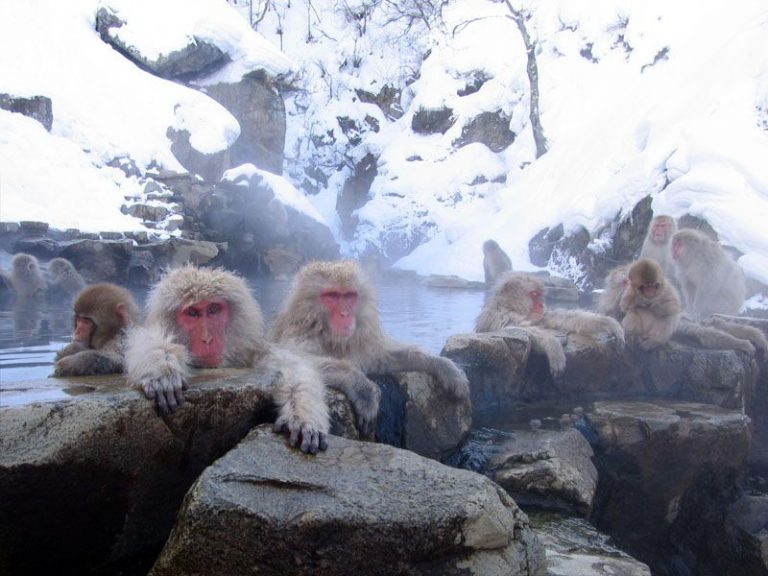 Every year we skip across time zones and lines of latitude to be with loved ones during the holidays. Upon arrival we meet the strangers who seem drawn into every family gathering—a newly adopted baby, a cousin’s fiancé—and our notion of family softens and swells into a broader understanding of kinship. In that spirit, and to acknowledge Monkey Day, the Dec. 14 celebration of “all things simian,” we urge you to journey to a distant country to visit a distant, not-quite-human relative, but a relative all the same. The Japanese Macaque, a venerable cultural touchstone for Japan, inhabits the rocky, harsh, high-altitude regions of Honshu Island. For centuries the macaques dragged themselves through four months of snow followed by another eight months of mere cold, but various accounts suggest that in the 1960s a curious female looked at the steaming pools of hot spring water for which the area is famous and thought, “Well, really, why not?” In she sank and the other macaques, no doubt noticing an expression that we ourselves recognize as bliss, decided to join her. The Snow Monkeys have been hot tubbing ever since. They now enjoy their own dedicated onsen in Jigokudani Park, and seem supremely unconcerned by the fascinated humans who climb up the snowy path in coats, gloves, and warm scarves just to marvel at them. Eyes closed, naked pink faces haloed in steam, they rouse themselves occasionally to groom one another. Physical contact with humans is a no-no, but you can get quite close to take pictures—honestly, they couldn’t care less. Their similarity to us, those dexterous fingers and familiar expressions, make it easy to forget the cold. But eventually you’ll feel it and head back down the hill to your own onsen. You should stay at the 400-year-old Kokuya Hotel Nogano. A traditional ryokan located on Shibu Onsen Spa street and a short walk from the monkeys, Kokuya is fed by six different hot springs, two located directly below the ryokan and visible through a glass floor outside the dining room. We recommend one of the ten rooms that feature a balcony with a private open-air bath, starting at $203. Visit ichizaemon.com/lang_en/index.html for more information. Jigokudani Park is open seven days a week; admission is $4. Visit jigokudani-yaenkoen.co.jp/english/html/top_e.htm for more information.