To be honest, I didn’t even know what a needle exchange was until I got to UC Irvine. I didn’t know that drug users’ chances of getting a communicable disease could be reduced by giving out clean needles. Or that O.C. had a drug problem. But I’m all about anything that has to do with under-served or marginalized populations. So when the founders of the Orange County Needle Exchange Program, third-year med students Kyle Barbour and Miriam McQuaid, told me about their plan to do this, I helped get it off the ground.

The program got its certification from the California Department of Public Health and opened in February. Since then, I’ve been at the civic center in Santa Ana every Saturday from noon to 3, taking in used syringes and giving out new ones to people addicted to heroine, methamphetamine, and crack cocaine—everyone from wealthy housewives to the homeless.

I was really bogged down by stigma before I started working with this program. The term “drug user” made me think of the junkie in a bathroom stall played out on crack cocaine, probably a person of color, poor, who didn’t seek out help or better themselves.
I thought it was an issue that would never touch me, because I grew up in Los Angeles in an upper-middle-class environment. But once I started working here, my perception shifted—it’s a problem that affects everyone. I just lost an elementary school friend to an overdose.

My first questions, like everyone’s, were “Is this safe? Wouldn’t a needle exchange encourage drug use?” As it turns out, it marginally limits it. Besides needles, we also give tourniquets and alcohol wipes, and we have a huge database of social services. We set up a table on the lawn and see about 180 clients per clinic day.

We follow a model that has been empirically supported. For every needle they bring, we’ll match that and give 20 more. Bring in three, you get 23. This limits reuse of any one syringe, limiting the spread of infection. People come in with zero to hundreds of syringes from a house of multiple users.

We don’t ask for names or personal data, as an incentive for them to come back. We simply see how many they bring and ask, “Can we offer you HIV and hepatitis C services (through another on-site organization)? Can we train you in naloxone?” Also called Narcan, it’s an expensive injectable drug that stops overdose in an emergency. More than 180 people have told us, “Because of the Narcan you gave me, I saved a life.”

Even though needle exchanges have long existed in L.A., the Bay Area, and around the world, somehow O.C. missed the boat—until med students stepped in. It has made me more tolerant and sensitive. I’m really proud to help. 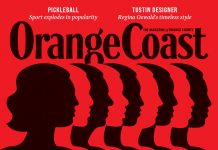