I was 52 and leaving my husband and home of 28 years, moving to a cute condo on my own. I threw away the reminder for my annual mammogram. I had no time for a pebble in my left breast when I was moving, teaching, dealing with two emotional young-adult daughters.

My friend Diana forced me to cram the test into my overloaded schedule. The radiologist wanted more pictures—probably, I thought, just to use the office’s new camera that I learned about during the first set of tests. Ridiculous, I thought. I have no risk of breast cancer. I eat broccoli, exercise, and cultivate positive thoughts. I will not have cancer. But I did, two kinds: a noxious knob near the nipple, and dangerous dust in the ducts. My breasts were small and unremarkable. I didn’t even think of myself as a girl. Why this?

The doctor cut out the biggest tumor the day my fifth-graders were proudly displaying their work for open house. My daughter drove me to the event that night because I wasn’t allowed behind the wheel after being knocked out that morning.

Afterward, I lay crying for hours, then decided to prepare for the worst and be grateful if it didn’t actually get that bad. I knew I’d face radiation or chemotherapy, depending on what they found during the surgery, so I went to the mall for hats to cover a bald head.

At Nordstrom I noticed the mannequin: slim hips, small waist, little breast buds. My body exactly—the body of a girl. My silent prayer rose with the piano music that echoed throughout the store: “I’m sorry I didn’t cherish my little breast enough. May I keep it?”

Bass piano chords resounded in the high ceiling. It felt like, “Nooooo.”

I held my breath during a musical pause. Then my silent petition: “May I keep my life?”

I heard the answer in a run of light, high notes.

Later, at home, I cradled my breast and spoke directly to it: “I’m sorry I didn’t love you enough. Thank you for nursing two babies without any complaint.”

But my body was a community from nose to toes, where all parts contributed to the common good. Headmaster Cerebrum spoke to the group. When one member threatens the rest, he told me, the answer is removal. My breast cooled, felt suddenly lighter. I imagined its answer: “I don’t mind going first. I can see the rest of you later.”

So in the ultrawhite glare of the operating room, I released my breast to Light. And after release came renewal.

My girlfriends brought me gifts, including cute tops with bold distracting patterns and chest pockets. My cousin, Tom, called from Texas: “Git bigguns so you kin play with ’um.” Women showed me their reconstructions: hard as tennis balls, full of scars and stitching.

I decided to stay away from hospitals and focus more on life than on appearances. For the first time, I gave myself permission to make my boobs bigger, more proportional. I experimented with funny fake ones. Cross-dressing friends fingered their brassieres and told me, “Use birdseed. It feels so good.”

So I tried organic brown rice, barley, oatmeal. I have carried money, tissues, sachet packets, and things I will not disclose in the little cove where my breast used to be. I observed breasts everywhere: big sandbags to little thumbtacks. I saw how they jiggle and sway and are not perfectly round or symmetrical. I scrutinized the ones I knew to be real, wondered if they ever seemed fake. And, amazingly, under certain conditions, they do. So I stopped worrying about whether mine looked real.

I see pictures of myself with various prosthetics during the last joyfully cancer-free decade. Sometimes the fake breast is up, down, or a bit sideways. The photos just remind me that the real one is waiting for me in the Great Beyond.

Studies Show
Because mammograms detect about 80 to 90 percent of breast cancers in women without symptoms, Susan G. Komen For the Cure offers $125 mammograms to women who don’t have insurance. 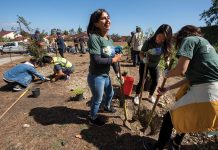 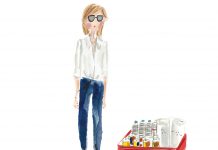