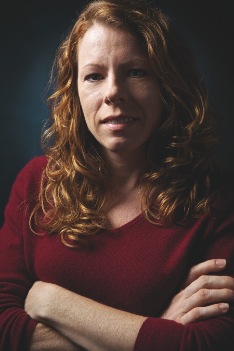 On New Year’s Eve 1999 I suffered my first full-blown manic episode at the age of 29. My boyfriend and I had planned a millennium trip to Key West, Fla. I decided not to go, so he went with my friends. I was angry, bored, and begging for attention. Looking back, it seems the episode had been building for days. I was telling crazy stories to anyone who would listen—at the gym, the bus stop—driving everyone nuts, talking a mile a minute, not sleeping, not eating, calling in the middle of the night.

So I burned some sweaters on the grill. I tried to cook a turkey, then stabbed it with a knife, pretending to slaughter it. I put on my boyfriend’s $800 suit, his shoes, and a tiara. I cut off my hair and put it under rocks in the neighbor’s yard. I clipped someone’s bushes and put the flowers all over the dashboard of my car. Sitting in it outside of a bar, I used razor blades to finish shaving my head. The cops showed up and arrested me for DUI, although I wasn’t drinking. They took me to a cell and watched me do sit-ups and push-ups all night.

The next morning, I got my first ride on a gurney at Royale Health Care Center, a mental hospital in Santa Ana. I was scared, which translated into more crazy behavior. I took other patients’ things, answered the phones “Good afternoon, Royale Country Club.” This led to my diagnosis and a treatment plan.

After I got out, I grew some hair, got a job, a new boyfriend, and started drinking to calm myself down. That became a problem in itself. I didn’t want to be mentally ill; I had other plans for my life.

In 2005, a second manic episode landed me in jail for 10 days until my parents hired an attorney who understood mental illness. The judge said, “Take your medicine and stay out of trouble.” Jail really got my attention. Seeing how upset my parents were, I wanted to prove to them that I was OK.

I started a drug regimen. It worked, although with a little weight gain, a little hair loss. Seven years later, I’m still on my meds. I don’t twitch, I don’t mumble, and I’m almost five years sober. I joined Comfort Zone, a faith-based support group in Costa Mesa, where a pastor encouraged me to go into public speaking.

I’m passionate about sharing my story, averaging four talks a month to police and other groups about how to deal with mentally ill people. I tell them, “If you run into a bipolar person, let them talk your ear off for 10 minutes.” I may be a success story, but every day is a struggle. I’m still embarrassed about a lot of things I did.

I’ve also started Project Q-Tip and handed out more than 1,000 kits—plastic bags with a mint, Q-tips, and a list of outreach programs, shelters, and mental health services. When I was running the streets, I wished someone had provided something like this. I might have gotten help sooner.