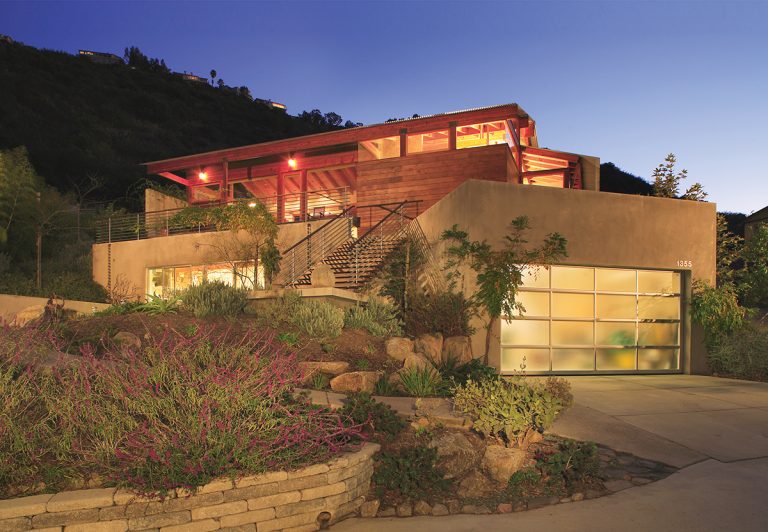 Artists Naomi and Scott Schoenherr’s commute involves only a flight of steps from where they live to their ceramics studio. Mornings find them with time to read the paper, inspect the milkweed plants for monarch butterflies, or look for the bobcat family—a mom and three kittens—that frequents the backyard while looking for gophers. “Our time is so much more flexible living and working in the same place,” says Naomi. “The only bad news,” says husband Scott, “is we also work all the time.”

Their 1,200-square-foot living quarters—an open-plan dining, kitchen, and living area with an adjacent master bedroom suite—sits atop the studio nestled into the hillside below. The couple purchased the land from an artist friend whose home burned in the 1993 Laguna Beach fire, then waited nearly a decade, “saving our money,” says Scott, before calling in San Juan Capistrano architect Geoff Sumich to build their dream home and studio.

Says Sumich: “They wanted to capture the feeling of a simple Japanese farmhouse,” a nod to Tokyo-born Naomi’s roots. To that end, he designed an artful two-story, post-and-beam dwelling of simple materials: poured-in-place concrete, plywood, and exposed Douglas fir beams. By inserting clerestory windows between the house and below-ground studio, the architect was able to bathe the work space in natural light. A small gallery in the back showcases the couple’s hand-carved, multi-glazed artwork. The artists specialize in custom pieces for the home (wall and floor murals, backsplashes, tables), as well as public art pieces such as “Little Treasures,” a pair of panels on the outside of a public restroom in downtown Laguna Beach. The panels are of native birds and plants, frequent themes in the couple’s artwork. Another public sculpture in Heisler Park won them Artist of the Year in 2013 from the Laguna Beach Alliance for the Arts.

Inside, the two-story home reflects a pared-down Japanese aesthetic, as well as other appointments reminiscent of the Land of the Rising Sun. A pair of vintage mizuya tansu, the stackable storage cabinetry Naomi’s mom sent from Tokyo, are rearranged side by side, topped with a granite counter that together make a kitchen island. A deep tub recalls soaking tubs in Japan, while a cantilevered alcove off the master bedroom has a small gallery where Naomi keeps her grandfather’s jizo, a carved Buddhist monk, and a seasonal ikebana floral arrangement. A trio of frosted windows that enclose this area recalls her native country. “At night we can see a shadow of the sycamore on the frosted windows,” says Naomi. “Like shoji screens in Japan, they give a nice diffused light.”

Their garden is planted in drought-tolerant palo verde and madrone oak trees, along with an array of succulents and herbs. It was awarded grand prize in the Roger’s Gardens 2007 California Friendly Garden contest. When taking a break from work, the artists sit on the back veranda contemplating the coastal sage-covered hillside and watching red-tailed hawks, cactus wrens, and orange-throated whiptails. “We love watching nature and its creatures,” says Naomi. “It’s so much nicer than sitting in canyon traffic.”