At 13, Randy Hild attached to his bike surfboard-trailer of two-by-fours and grocery-cart wheels, then rode 90 minutes from his home in Garden Grove to surf at Seal Beach. “I went to bed dreaming of waves morning, noon, and night,” he says. He eventually became an executive at Quiksilver, the marketing whiz behind Roxy, and is now co-partner of M.Nii surfwear, one of GQ’s 2014 best menswear labels. For 25 years, he and wife Debbie lived in Laguna Beach, near the ocean he loves. When they became empty nesters, they decided to leave their 1939 cottage for something different. “We were both always attracted to the midcentury look,” Debbie says. They began their search for a property with the proviso that the new home would be near the ocean and within a five-mile radius of friends in their former community of Three Arch Bay. It wasn’t easy.

Then they discovered Niguel West, a midcentury enclave in Laguna Niguel, where in 1964 architect George Bissell built approximately 70 homes. They fell in love. Alas, the homes rarely changed hands. “We canvased the neighborhood nearly every weekend for two years, walked our dog, met neighbors, left notes,” Randy says. Then one Sunday in 2011, they saw a car parked in a driveway and an open door to a seemingly abandoned home they had passed many times. Debbie ventured inside.

The son of the owner was gathering things for his mother, who was in a nursing home. “He and his wife invited us in, and we talked for an hour, telling them about our search and how much we wanted to restore a midcentury home,” Debbie says. When the owner passed away 18 months later, the son called the Hilds and said, “Make us a fair offer—we feel sure our mother would want you to have her home.”

That’s when their renovation project transformed into something more—a home to steward and cherish. “We kept the architectural integrity of the original as much as possible,” Randy says. He called in landscape architect Ann Christoph, who had worked with Bissell, to create a 1960s-appropriate garden. But they wanted to update the home’s interior to make it “livable and relevant,” says Randy. To that end, walk-in showers replaced old tubs, and pushing out the back of the home and removing the galley kitchen’s walls transformed the living room into a large open space. New kitchen cabinets and a large center island are ideal for Debbie, an avid cook who co-owns a candy company, Haute Toffee.

In keeping with the era, furnishings include vintage Danish modern, Charles Eames, and Milo Baughman pieces. The home’s style comes by way of Randy’s surfing collection, from his prized Koa wood board shaped by surf legend Greg Noll to his gallery of surf paintings in the living room. His office houses surfboard fins and kitschy Hawaiiana, around 300 books on the sport, and every issue of Surfing magazine since 1964.

When Randy returns from riding waves at nearby San Onofre and pulls up in front of their newly minted Bissell home he says, “I would swear I’m back in the ’60s.” 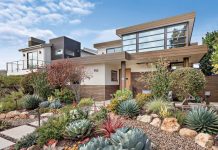 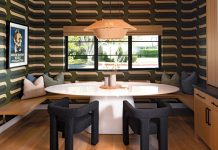 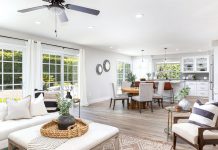