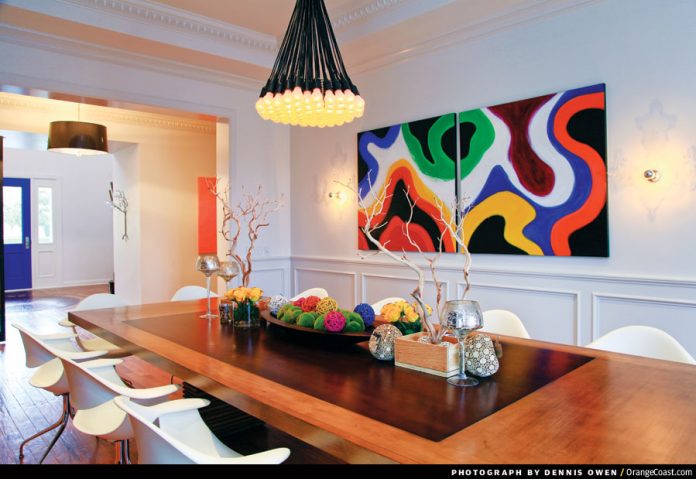 Prospective buyers don’t always end up with the storied homes of their dreams. They usually take their newfound digs—however imperfect—and make them their own. Such was the case for Dean and Carla Soll. With three children, her live-in parents, and five cars to juggle, they needed more room, so in 2009, they began searching for a property.

Dean, president of SubZero Constructors, a Rancho Santa Margarita company that builds refrigerated buildings and warehouses, bid on an empty lot in gated Coto de Caza. But the bank, deep into a mountain of foreclosures, didn’t respond, so the Solls looked at other properties. A classic, two-story Colonial in the same area had great bones, but its blue floral carpet, brass chandeliers, and country French furnishings turned him off. “He walked out,” Carla recalls.

“It just wasn’t what I wanted,” Dean says. “I had envisioned a custom, modern home that I would build from scratch.”

With still no response from the bank, Carla, an interior design hobbyist, persuaded her husband to take a second look at the Colonial. “Even though it was traditional on the outside,” she says, “I knew we could turn the inside into the warm, modern-contemporary we both wanted.” She also knew that building from scratch would confine them to their cramped home for their children’s final years of high school, not to mention that her parents badly needed easy-access, ground-floor space.

They bought the Colonial.

The front door of their renovated home is now electric blue, to add a jolt of color to the white, classic-column exterior and to hint at the new modernity that awaits inside. Jettisoned: the traditional staircase, carpet, and chandelier. In their place: a sleek powder-coated, metal-and-wood stairway, dark wood floors, and an Italian-style chandelier with exposed bulbs.

The Solls added modern furniture and pared-down window treatments, and replaced brass hardware with brushed nickel. They also modernized most of the existing lighting fixtures, and painted the downstairs walls gallery white, the perfect foil for the colorful expressionist paintings Bolivian-born Carla creates.

But it’s the new 22-foot, marble bar that makes guests ooh and aah. Inglewood architect Chris Mercier realized Dean’s dream of a commercial-style home bar. Dubbed the Esso Club West after his college watering hole, it has three TVs, a Sonos sound system, a dual-tap Kegerator, a Sub-Zero wine fridge, a Bosch professional ice maker, and a built-in Miele coffee maker. It’s the perfect indoor-outdoor space for entertaining. “We’re both so happy with the house and how it turned out,” says Carla. “We especially love the modern bar.”

Photograph by Priscilla Iezzi
This article originally appeared in the April 2014 issue.