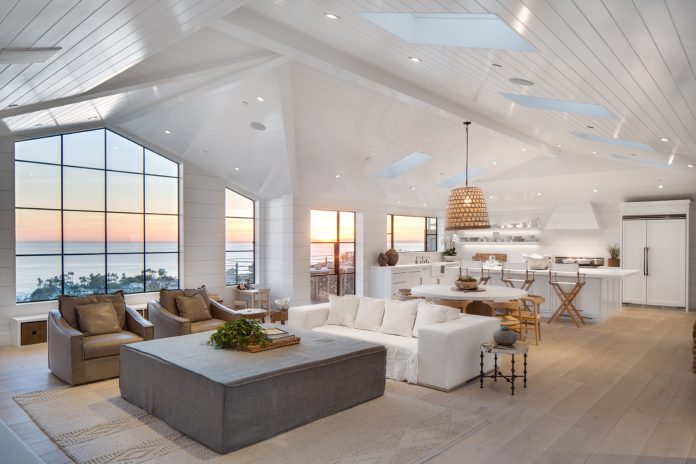 Like many other Laguna homes, this renovation project, which began in 2011 and finished in 2016, took several years to complete. During the remodel, the homeowner got engaged and then married, which altered the plans, as the newlywed couple designed their dream home with the help of architect Anders Lasater.

Since this was a home where they would be planting roots, they added square footage (from 2,500 square feet to 3,570) and some defining elements to give it wow factor. The low windows in the main living space were replaced with a large gable end topped window to frame the ocean view and serve as a main feature of the space.

“They love the farmhouse aesthetic in this large, barn-like structure so that was important to capture and give them this sense of space, but also sophistication,” says Lasater.

Giving the roof some height is always a challenge in Laguna, but they were able to work within those building restrictions and make it feel like a new home. This also meant they had to collaborate with the neighbor so they could accentuate the interior, while protecting the neighbor’s view.

“We ended up with a room with a big volume horizontally and vertically, but a thoughtful division of space,” Lasater says. “This house captures a way of living that’s casual, classy and today because she had such an eye for what furnishings, hardware, light fixtures and materials belong in the house.”

The home’s white-on-white look is casual and chic, but lighting is the key to getting it right.

The white oak doors, for example, were a bright white and Lasater had to fine-tune the space by bringing in skylights for the main door and large, European steel windows on the ocean facing side of the house so it’s inundated with light.

“The other side doesn’t have that same light; the skylights to bring in light from above to balance that,” Lasater says. “So now both sides have equal amount of light and all the white has a nice glow … You’ve got to think about the way the light moves through your house and reflects on the surfaces.”

See the Before & After transformation.