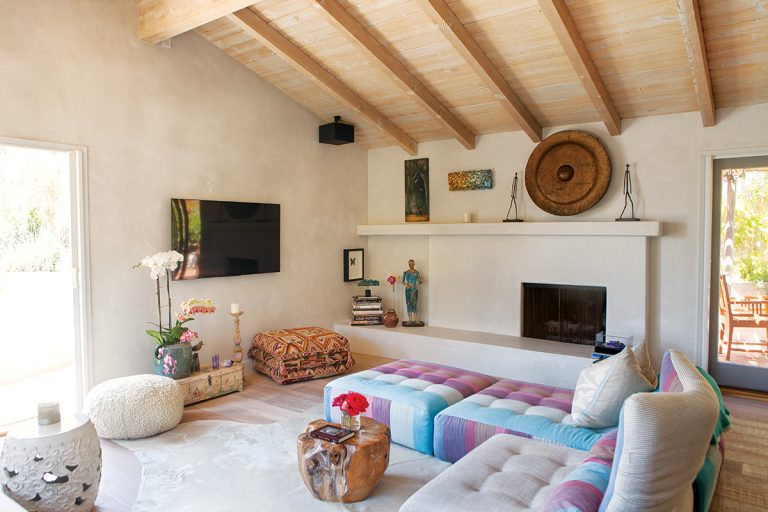 World traveler Christine Hallen-Berg acknowledges she inherited some Viking wanderlust from her Norwegian forebears. When she was 8, her father, who hailed from Oslo and was then vice president of marketing for General Steamship Corporation, took her on a three-week tour of the South Pacific. “I was hooked,” says the interior designer, who has been globe-trotting and collecting ever since. When not trekking through Bhutan, ascending the Inca Trail to Machu Picchu, or ice-climbing in northern Patagonia, she calls a 1958 “cul de sac shack” in Laguna Beach home. Hallen-Berg’s beloved godmother and former design partner, Claire Robinson, left her the California ranch home when Robinson passed away in 2012. Hallen-Berg continues their interior design services at Robinson Hallen-Berg Design in Laguna Beach.

Although the home appears traditional on the outside, worlds merge inside. The curated collections from Hallen-Berg’s many travels transform the modest house into a retreat for Scheherazade. It begins in the foyer where a tree of life sculpture from Mexico sits atop a Japanese tansu chest flanked by hand-carved Moroccan panels. In the newly expanded living room (she tore down the wall separating the kitchen and living area to create one large room), a giant bronze gong she brought back from Bali hangs over the fireplace. Nearby, her low-slung Roche Bobois sofa with loads of cushions makes a perfect spot for cozying up with friends and telling tales by the fire. The striking, blond Hallen-Berg says she’s an incurable collector at heart, and she has piles of textiles and drawers overflowing with ethnic jewelry to prove it. The master bedroom’s Japanese chest of drawers that once held obis now houses her extensive collection of necklaces and rings. In her home office, larger ceremonial necklaces from China, Indonesia, and Rwanda are displayed in hanging, hinged box frames. She designed the boxes to open so she has access when she wants to wear the necklaces. Her vintage textiles fill closets when not adorning beds and tables. “They add so much color and texture to a room,” she says. “And they’re all very sentimental to me. … I remember where I got each one.”

The former owner of Overseas Style in Laguna Beach, an import company  specializing in Southeast Asian furnishings, Hallen-Berg says travel informs her design. On her first trip to Bali, she fell in love with the creative way the locals mixed contemporary and ethnic pieces—“It allowed me to think out of the box.” As she gazed out the bus window on a recent trip to Patagonia, hues of the countryside helped her envision future palettes. “I have a photographic memory for color. … What I see stays with me.”

So where is the intrepid traveler off to next? After a 10-day birthday trip earlier this year exploring Prague and Stockholm, she has a hankering for something more exotic: “Perhaps a trip to Morocco or a visit to Turkey. I’ve always wanted to see the Grand Bazaar in Istanbul.”