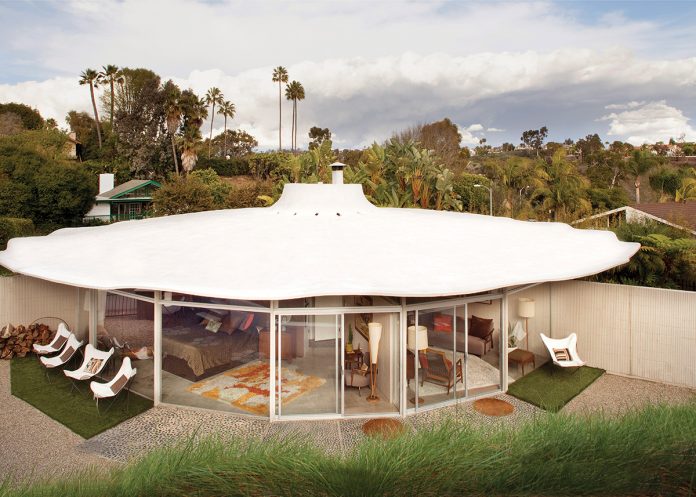 On the eve of Einar Johnson’s final job interview with the Eaton Corp. in Irvine, the aerospace executive Googled “architecture in Orange County.” The first thing to pop up was a 1964 George Bissell concrete home in Laguna Niguel. Known as a Horizon House, it was part of an early ’60s nationwide effort by an association of cement companies to introduce creative ways to use the product, and show that a home could be built inexpensively with it.

The unusual round dwelling, with its cantilevered concrete roof, intrigued Johnson and partner Pat Gough. “I said to myself, ‘If I get this job, I’m going to buy that house if it’s still available.’ ”

It was, and he followed through on that vow in June 2005. During the next two years, the couple, who also own a 1962 Ray Kappe home in Los Angeles, meticulously restored the two-bedroom residence. Their most tedious chore was removing the faux brick that covered the original vertical-ribbed cinderblock in the kitchen. “All the grooves had been filled in with a binding agent,” Johnson says. “It had to be chipped out bit by bit.”

Elsewhere, they stripped the cabinets that the former owners had painted in a kitschy Palm Springs turquoise-and-white color scheme, then added new doors made of wood-grain Formica, the original material. They also removed paint from the sides of the nifty, pullout O’Keefe & Merritt vintage stove that “still works perfectly,” says Gough, as well as the shag carpet that covered the concrete floor in other parts of the house.

Floor-to-ceiling plantation shutters once covered the uninterrupted wall of windows. They’re gone now, revealing outdoor plantings that suddenly seemed part of the room. They also refreshed the interior with a coat of matte white paint, including the living room’s focal point—a sprayed-on “shotcrete” fireplace, hand-finished into its organic shape. “It’s so smooth,” Johnson says. “Visitors can’t take their hands off it. I’m thinking of putting up a sign: Make sure your hands are clean before petting the fireplace.”

The owners stayed true to the midcentury look, appointing the interior with period furnishings they found on eBay and at various flea markets. Their first acquisition: a ’50s teak bar with a tambour door that echoes the vertical grooves of the living room’s concrete-block wall. They also bought a low-slung ’60s couch that hugs the curved room.

But what Johnson and Gough love best about both of their midcentury dwellings (they flip a coin to decide whether they’ll weekend in Laguna Niguel or L.A.) is their indoor-outdoor feel. To give themselves a bird’s-eye view of their whimsical Orange County home, they built a patio of overlapping circular decks on the adjacent hillside. Johnson, who’s fond of sipping mimosas while soaking in the round hot tub overlooking the round roof says, “Everything had to be round. Anything square just wouldn’t work here.”