two years ago brought out the “inner gypsy” in designer Deborah Waltz.

“I would lay in my hotel room at night and gaze at the hand-carved ceiling and the beautiful painted tiles on the floor and walls,” she says. “The pattern-on-pattern and vibrant colors were like a Matisse painting.”

When Waltz moved into her three-story, 21st century tract home in the hills of Orange a year after her trip, its looming beige walls seemed plain indeed. “I began stenciling and painting everything in sight,” the owner of Peinture Studios in Costa Mesa says with a laugh. Not too surprising, since she holds workshops there on how to update vintage furnishings using colorful Annie Sloan Chalk Paint.

Influenced by Moroccan color and design, she coated her home’s walls in burgundy, graphite, and country gray, repainted a large armoire duck-egg blue, then retouched a vintage portrait to match. Stencils inspired by Indian, Moroccan, and central African motifs allowed her to enliven walls, decorate the fireplace mantel and a nearby bench, detail Doric columns and the kitchen backsplash, and frame artwork and windows. “Stenciling is so easy and inexpensive to do,” says Waltz, who peppered a dining room wall with large paisleys in two hours. “And you get exactly the colors you want, which isn’t always the case with wallpaper.”

To add further interest to the generic space, Waltz introduced architectural remnants. A pair of weathered columns to the right of the fireplace and an old porch post from a Victorian home “have stories to tell,” she says. Ditto the custom-made headboard in the master bedroom, fashioned from old house corbels and weathered siding. She also replaced contemporary lighting throughout the house with vintage crystal chandeliers and other period lamps. “Old fixtures are not just about light but about creating patterns and shadows on the walls and ceilings,” she says. “I always change them out. It makes such a difference.”

Her array of updated secondhand furnishings, in styles from Victorian to midcentury, adds the final decorating touch to a look she calls “multiethnic eclectic with a splash of gypsy.” Indigenous influences are seen in the pair of living room chairs upholstered in huipils—loom-oven blouses—from Guatemala. Elsewhere, embroidered suzanis—tribal textiles from Turkestan—are repurposed into curtains, while Uzbekistani tassels add pizazz to simple window shades. Vintage area rugs from Persia and North Africa add more pattern and color.

One of her favorite souvenirs from her sojourn in Marrakesh is a wedding blanket fringed with sequins, which drapes the end of her bed. The designer, known for painting just about anything, is using the Annie Sloan paint color Antoinette on tufts of yarn to pick up the cream-and-pastel pink palette of the upstairs master suite. Only a single wall there has been stenciled, in a sedate French linen and old white. “I wanted a quieter look for the bedroom,” Waltz says. “If I stenciled and painted in bright colors everywhere, it would be too overwhelming.
I’d never get to sleep.” 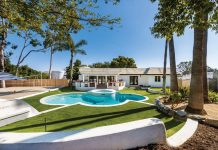 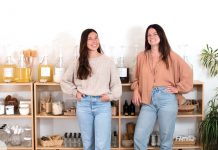 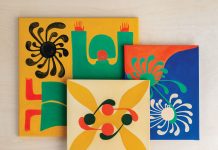