Home Stuff We Love Arts What Does It Take to Dance in Cirque du Soleil’s “Totem”? 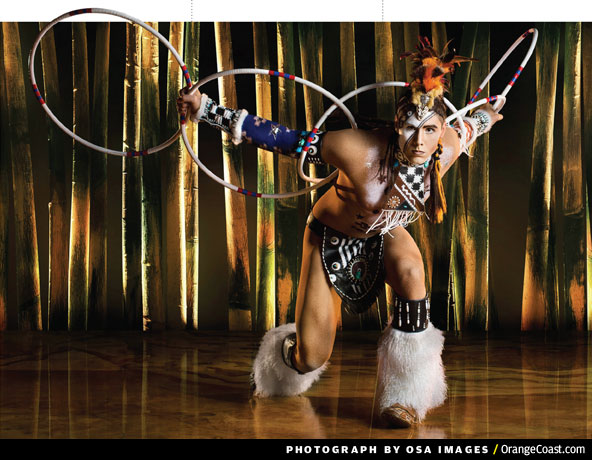 Featured in Cirque du Soleil’s “Totem,” Hernandez was 10 when an uncle taught him this Native American dance. Two years later he was performing regularly at events such as Lake Forest’s Rancho Days Fiesta. The 23-year-old, whose mother is a member of the Lumbee Tribe, can manipulate as many as 14 hoops, though his Cirque routine requires him to use only five. “You measure your hoops based on your height,” says the 6-foot-1 Hernandez. “The guy I replaced was 5-foot-3. They were originally trying to give me his hoops, and I was like, ‘No.’ ”

Tell me about the traditional hoop dance.
It was performed before weddings. The hoop is a symbol of the wedding ring. It represents eternity—there’s no beginning and no end. The main image in the dance is the eagle, and as you see me putting on more and more hoops, the eagle grows.

What does it take physically?
Cardio, and a lot of endurance and focus. And, of course, rhythm. It’s a dance. It’s not just juggling.

And the Cirque version?
It’s flashier. I would traditionally dance in one [small] space. With Cirque, I have to use the entire stage.

Does it still feel like a meaningful expression of your culture?
I’ve grown so much as an artist and I’ve learned to connect differently with the crowd. It’s so much more intimate than at an event where you’re dancing and people are shopping at the powwow. Here, it’s: “Here I am. I’m a Native American. Watch my dance.” I can really touch people.