Home 2015 Was the Rev. Robert Schuller a Buckeyes Fan? 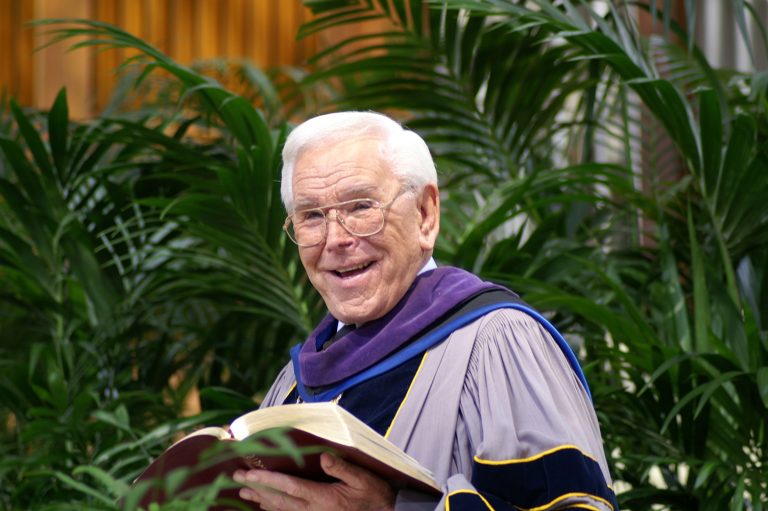 Our friend and occasional contributor Mike Stockstill passed along the following memory of the late Rev. Robert Schuller, the ever-positive, can-do preacher who died earlier this month. We, in turn, wanted to pass it along to you:

“I’d organized a monthly breakfast group of thirtysomethings from Orange County that met at the old Saddleback Inn. The room assigned to us had a sports motif, but our group was almost exclusively drawn from government, politics, and the law. We had attracted some important local figures as speakers, but when a friend from the group vouched to the Rev. Schuller’s PR rep that ours was a meeting he should visit, I felt both proud and a bit intimidated. Schuller was at the height of his powers, an international figure, an author, and a cleric.

“As breakfast was served we made small talk, then Schuller asked me about the group. I described the members as politically active and bipartisan. He nodded and kept eating. A few minutes later he asked again, ‘Now tell me, just how does this group work?’ It finally dawned on me that he didn’t know which of his regular speeches to use for us. I assured him that once everyone introduced themselves, he’d have a clearer picture.

“I introduced him and settled back to listen. Rising slowly, he cast his eyes across the room. ‘Usually when I speak, there’s an image of Christ present from which I can draw inspiration,’ he said. Nervous glances flew from member to member. He paused for effect. ‘But I see the symbol of the Ohio State Buckeyes on the back wall, and that will do for today.’ He gave his familiar smile and launched into his presentation.”