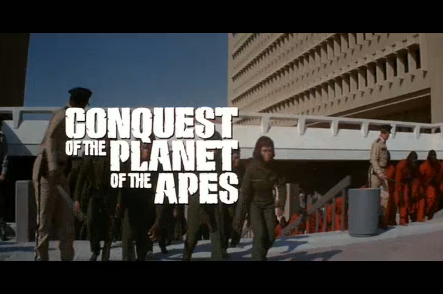 “Conquest of the Planet of the Apes” was the fourth of the five original “Apes” movies, all produced by Arthur P. Jacobs. Set in a dystopian 1991, the movie, which was released in 1972, was partially shot at UC Irvine and at Century City in Los Angeles, taking advantage of the futuristic architecture of both places. Among the UC Irvine buildings we noticed in the trailer are Social Science Laboratory, neighboring Social Science Tower, and Langson Library.

California’s aerospace industry was booming when fledging UC Irvine unveiled its utopian designs of high-tech architecture in the middle of a beautiful natural landscape. The buildings’ space-age look attracted the filmmakers of 1972’s “Conquest of the Planet of the Apes,” which was partially shot at UC Irvine. These are some of the details throughout the original campus that capture that sense of a new world rocketing into the future.

You can see more “Conquest of the Planet of the Apes” clips here.