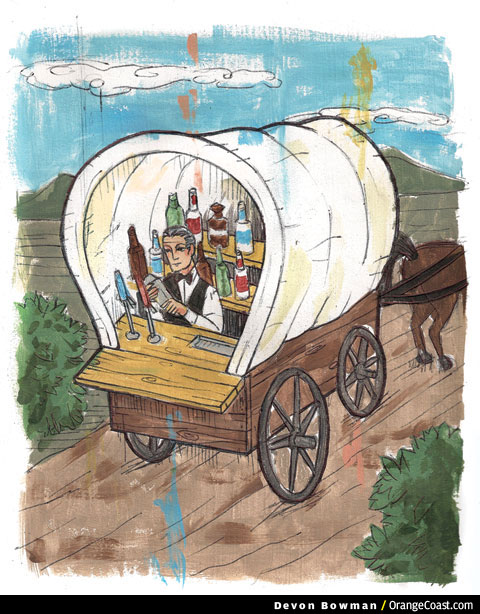 Q: What’s with those plaques left trailside by El Viaje de Portola?
The markers are left by the equestrian group, formed in 1963, which raises money for restoration projects at Mission San Juan Capistrano. Members include big landowners, businessmen, politicos, and even some real cowboys. Their annual three-day, dudes-only horseback camping trek follows the still-undeveloped portions of explorer Gaspar de Portola’s 1769 path through Orange County. Throughout their 30-mile round trip, they often dedicate historic markers along the route. I would crack wise about the fully stocked bar that follows them in a wagon, but I’m still hoping to get invited someday.

Q: O.C. was a hotbed of anti-communism. Was Joseph McCarthy part of the local political scene?
No, but the future Red-hunting senator did serve as base legal officer at the Marine Corps Air Station at El Toro during WWII. Already a judge by the time he volunteered for the Marines in 1942, McCarthy served two tours as an intelligence officer in the South Pacific. As captain, he was assigned to El Toro for the latter part of 1944, but resigned his commission to return to Wisconsin to run for reelection as judge and perhaps also to begin planning his 1946 U.S. Senate race. In the 1950s, his radical approach to hunting communists not only harmed innocents, but also did long-term damage to more rational efforts to root out enemy agents.

Q: Garden Grove is known for its Strawberry Festival, but wasn’t it all about oranges there at one time?
Citrus was the major local crop until “quick decline” disease began destroying groves in the 1950s. In fact, the town’s major annual shindig was called Grovers’ Day until strawberries supplanted oranges and the event was renamed for the berries in 1958. The following year’s festival added the parade, the Red-Head Roundup, and the Miss Strawberry Festival competition. The festivities, from May 24 through 27 this year, help charitable causes. Alas, the last strawberry field in Garden Grove was cleared for development last year. Stay tuned for the Tract & Pavement Jubilee.