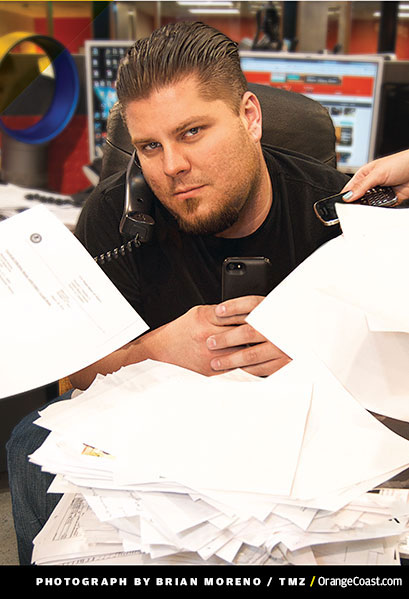 The Trade
In the 24/7 world of pop culture coverage, the news director of “TMZ,” the 9-year-old TV entertainment operation that airs locally as “TMZ
Live” on KTTV-TV
Channel 11, decides which stories to report and from what angle.

From exposing L.A. Clippers owner Donald Sterling’s indelicate views on race to a video of an elevator assault on Jay Z by Beyonce’s sister Solange, it’s all in a day’s work for the 33-year-old Orange resident. Walters typically works from 6 a.m. to 6 p.m. weekdays, managing celebrity news, sometimes co-hosting the studio-centric “TMZ Live” show he co-executive produces, and occasionally doing field work such as dropping in on Charlie Sheen for the lowdown on the TV star’s latest Twitter tirade with his ex-wife about the custody battle for their twin sons.

So who leaked the Sterling
rant to “TMZ”? You can tell us.
We’re a news organization
and we don’t reveal our sources,
but you knew that already.

Fine. But did you guys foresee the
swift impact that story would have?
We knew it was going to be a big deal before we published, but no one could predict just how big it got. [NBA Commissioner] Adam Silver made a strong statement by banning Sterling for life, and he’s being hailed as a hero. Was it the right call? I don’t see how any other action would have been appropriate.

Do you follow hundreds of
celebrities on Twitter?
The old days where the publicist would write up a statement and send it to magazines and network news are over. Following celebrities’ Facebook and Twitter feeds is a definite part of gathering news. One of the perks of having a younger staff is they’re hungry and know how to use social media. Even me, I’m behind on some of it.

How’d you get your job?
When I graduated college, Chad Weiser, my best friend in the world since I was 12, said his older brother Steve worked for the TV show “Celebrity Justice,” and there were entry-level positions available. I interviewed with Harvey Levin and he hired me. My job was to go down to the L.A. courthouse and get documents pertaining to celebrity divorces, and lawsuits. When Harvey started “TMZ,” he brought me along. Harvey’s a genius. I’ve never
worked for anybody else.

What’s the biggest misconception about your job?
That all the paparazzi in New York and L.A. work for “TMZ.” Our camera people are professional and courteous and trained, so if a celebrity is coming out of a restaurant or a nightclub and asks not to be filmed, we don’t. We want them to have fun with us and be engaging. Also, because of the kind of stories we get, [there’s a misconception] that our newsroom staff of about 60 reporters is much larger than it is.

What’s the story you’re most proud of?
The death of Michael Jackson. We got a tip from a paparazzi agency camped outside his house that an ambulance had pulled up. I called a confidential source and asked about the nature of the call to that address, and the person told me it’s a black male, 50 years old, in cardiac arrest. I literally dropped my phone on the desk. I’ve been a huge Michael Jackson fan since I was a child, and it was the weirdest mix of emotions. It was a gigantic scoop for me and “TMZ,” but I was genuinely upset because Michael Jackson was dying, and I was the first person in the media who knew that.

Other news outlets waited several hours to report it.
Traditional news outlets were calling our newsroom to confirm whether the story was true, and our natural reaction was, “Of course. It’s on our website.” When we broke it, I was asked to do an interview with CNN. I was on hold, with a phone in my hand, still working the story, and after a couple minutes the CNN producer came back and said they didn’t believe it, they were going with a story that Michael was in a coma. Afterward, people realized that “TMZ” was accurate and here for good.

Which story do you wish you could
take back, or cringe thinking about?
People don’t necessarily believe this about “TMZ,” but several times I’ve seen or read things that would make your toes curl, but we won’t do it because we’re uncomfortable about how it came to us, or the content.
We found court documents about
[a big star]’s conservatorship, and
part [of it] concerned her children—
not something that should be public.
It turned out it was a sealed document that accidentally had been unsealed; we even called the people involved and notified them. More often it’s something like that, where I’m
proud that we didn’t run something.

Even if another outlet gets
wind and goes with it?
Sure, if we decided not to do it
because it was ill-gotten. There
are certain things that are private.

What’s your reaction to critics’
perception that “TMZ” ambushes celebrities to embarrass them?
We tend to shoot video and talk to celebrities who want to be covered. Sometimes they’ll cover their faces, but they’re at the most popular nightclubs in town. They know the paparazzi are there.

You realize you’re blowing a lot of
people’s perceptions of “TMZ,” right? That it does anything for a story?
It’s the opposite. Your mind would
be blown by the stories we’ve killed.

Does “TMZ” pay for stories?
We buy photographs and videos, and
pay for tips that lead to stories that we can independently confirm, but we don’t pay for celebrity interviews. Harvey taught us a long time ago that when you pay for interviews, it gives the source
an incentive [to falsify or embellish],
and sometimes the story changes.

Your show is taped near Marina del Rey. It’s a long commute, no?
Every Saturday morning when I wake up with my family, I realize I’m in paradise. I have two small children, with two sets of grandparents who live nearby and will watch them. I don’t mind suffering the drive to live in such a great area.

In your opinion, which celebrities
are the biggest jerks?
I actually don’t have that much personal interaction with celebrities. We don’t cover red carpets, movie premieres, or junkets. But I can tell you that Charlie Sheen is a great guy!

Photograph by Brian Moreno / TMZ
This article originally appeared in the July 2014 issue.