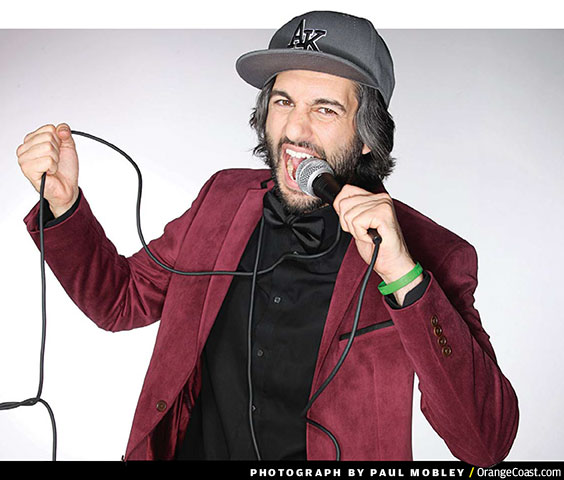 The 33-year-old comic is making a name for himself on the SoCal circuit after touring for several years with Maz Jobrani, a fellow Iranian-born performer well known on the scene. He has appeared on the big screen (a cameo role in the 2012 Oscar-winning film “Argo”) and the small (starring in the MTV prank show “Jerks With Cameras”). The former Orange resident first took to the stage when the housing bubble burst, ending his job as a real estate appraiser in Huntington Beach. He lost everything but his sense of humor.

How did you go from real estate to comedy?

Although I’d done a few open-mic shows and loved it, I went to UCLA for my parents’ sake. After I lost my real estate job, condo, and car in O.C. in 2009, I just moved to L.A. and started over.

Were your parents disappointed?

It wasn’t thought of as a viable career option. My dad said I’d be a homeless street performer, which was pretty much true for a while.
I’d work at comedy clubs for free every night until 2 a.m.

What kept you going?

I looked at Maz Jobrani and Ahmed Ahmed—Middle Eastern comedians who’d made it. Eventually I started working with them. Now
I hear from kids who want to do comedy, and I’m glad I can help. It’s great to see the rise of Middle Eastern comics, to show the world we like to laugh and entertain.

I play an airport employee.
I have a big beard and I check [the Americans’] passports. That’s it. But it was cool to audition for Ben Affleck.

Photograph by Paul Mobley
This article originally appeared in the August 2014 issue.