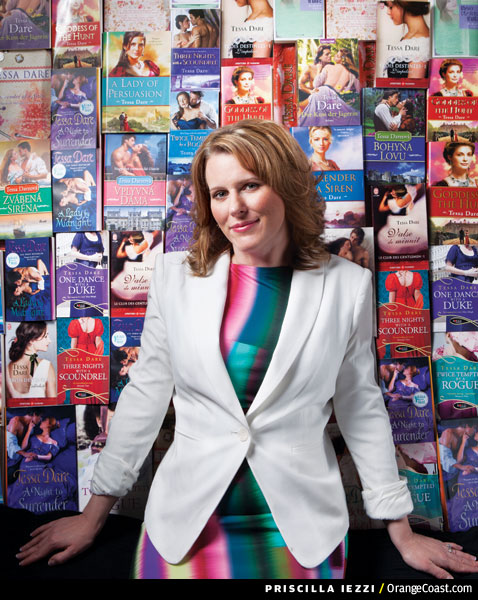 The Trade
The prerequisites for a romance novel are a central love story and a happy ending. It’s a hot-selling formula for the genre’s predominately female readers, who are estimated to have helped ring up more than $1.3 billion in U.S. sales last year, according to the Business of Consumer Book Publishing.

Ortega is best known by her pen name—Tessa Dare, the New York Times best-selling author of historical romance novels. Raised in the Midwest, the 37-year-old North County mother of two earned a master’s degree in library science and jumped into what she thought would be a lifelong career as a librarian. But six years ago, she hit the jackpot: a six-figure, three-book deal with Ballantine Books. This month her latest, “Any Duchess Will Do” (Avon Books), closes out Dare’s Spindle Cove series about the unconventional young ladies of a fictional town in Sussex, England, circa 1815.

Were you one of those voracious readers as a child?
Absolutely. My parents’ rule was that we had to go to bed at 8 o’clock, even in fifth or sixth grade, until I was so old it seemed unjust. But once we were in bed, we could stay up reading as late as we wanted. So I don’t know a better way to make a reader.

What drew you to romance fiction?
I read quite a few in high school. And then, when I went to college, I sort of fell away from it. I think it’s no secret that in our culture, in general, the arbiters of art, culture, and good writing don’t necessarily look too fondly on romance as a genre. I never went back to romance novels until I was right about 30 and having kids.
I realize now that all my favorite books had a love story in them. My two favorite authors in high school were Jane Austen and Julie Garwood. I was always reading for the love story.

Why’d you decide to write one?
Part of me always wanted to be a writer, but I didn’t have a whole lot of skills for how to go about that. I didn’t even understand that there were skills to be cultivated. I’d seen the 2005 “Pride and Prejudice” movie, and I was so excited about it. I went online and found a whole lot of people who like Jane Austen,  these movies, and historical romance. I connected with some online communities of Jane Austenphiles—“Janeites,” is the word we use. I discovered fan fiction, read tons of it, and started thinking, ‘Maybe I could write some of this.’ There was this online fan-fiction contest sponsored by Avon publishing. I ended up winning the grand prize, a trip to New York to meet people at Avon HarperCollins.

Your first love scenes—difficult to write?
There’s a little hill you have to get over when you’re writing your first romance novel. You sit back and think, “Am I really writing this? I can’t believe I just wrote that! Whoa, look at that!” Then you sort of get used to it. Any good love scene needs to be like any other scene in the book, with purpose and conflict and meaning. Otherwise it doesn’t deserve to be there.

How would you rate the sexiness of the love scenes you write?
On a 1-to-10 scale of spiciness within the genre, I’d probably rank a 6. The purple prose euphemisms have fallen a little out of favor now. Most of the time I just call it what it is.

How’d you come up with your pen name?
When I signed on for that Avon fan-lit competition I needed to choose a screen name, and I didn’t want to use my real name. At hand was a book one of my fan fiction friends had told me I really needed to read to complete my education, “Middlemarch” by George Eliot. The prologue was all about the heroine’s fascination with St. Teresa of Avila, this famous feminist mystic. That’s how I chose Tessa. But the screen name Tessa was already taken, so I just added a D. Eventually, I wanted to set up an email address … and I had Tessa and a D, and thought, “Well, I should come up with a last name that goes with it.” I thought of Darcy because of “Pride and Prejudice,” and I thought, “Nah. That’s a little too desperate-looking.” So I thought, “OK, Dare. That sounds romance-y.”

What do you think of “Fifty Shades of Grey”?
I’ve not read it. I am excited that female sexuality has become a consumer force, women saying with their dollars and their time that we are entitled to our fantasies, too. There’s this attitude about romance that women will get confused or deluded, or that readers who enjoy romances must be people who don’t like real life. It’s such a mistaken idea.

You’re a member of the Romance Writers of America. How’d winning the award for excellence in regency historical romance change your life?
It was a huge honor. The conference happened to be in Anaheim, so my husband came, and my kids—well, they were upstairs in the hotel room, having fun. I got a sparkly dress. I even brought my hairdresser to the hotel to do my hair and makeup. On a day-to-day basis romance writing is really not that glamorous, but that was sort of a Cinderella night for me.

What’s this whole experience been like?
Wonderful. Writing romance has connected me with more savvy, brilliant, interesting, inspiring women than I’ve met doing anything else in my whole life. It’s an amazing community, so it’s exciting and enriching to be part of that.