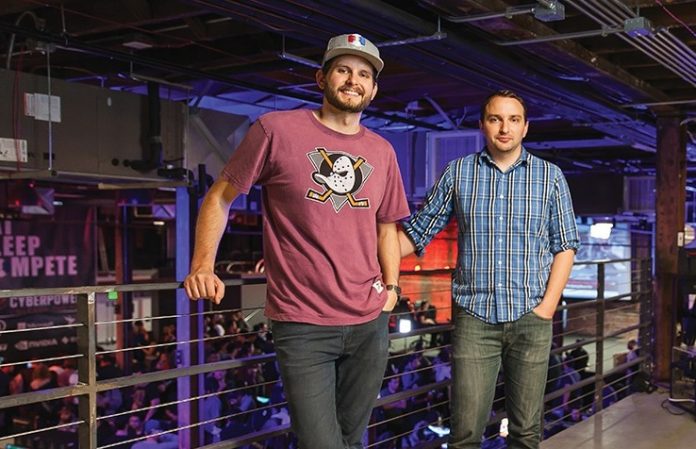 Tyler Endres and Paul Ward, childhood friends-turned-business partners, say their new competitive gaming and entertainment complex, the first of its kind in North America, is the next big thing to top the pro sports circuit. The owners of Santa Ana’s eSports Arena knew if they built it, video gamers would come. In August nearly 11,000 fans packed Madison Square Garden to watch top pros compete in “League of Legends,” a multiplayer game with more than 85 million players worldwide. Some prize pools for eSports tournaments now exceed $18 million—and that’s dollars, not tokens. At the 15,000-square-foot arena, pro gamers and their fans gather to enjoy a shared, live-action experience.

Why do people pay to watch others play video games?
Endres: Pro gamers have their followers just like any other sport—that “League of Legends” tournament in New York was a sellout event. Before we officially opened, we had a couple of soft launches to broadcast some matches, and we had about 500 people come.

They can come to play, too?
Endres: Absolutely. We provide the total gaming experience for anyone and everyone, amateur to professional. You can join a team here, or you and your friends can compete with other teams onsite. We’ve got a sportscasters’ booth ready to go, so you can have your match announced play-by-play while we stream the game online. Tell your friends and families, “Hey, watch me on this broadcast. I’ll be playing.”

Any scouts on the premises for the big leagues?
Ward: Sure, that happens. We get in a lot of the brand-name sponsors to watch our local tournaments. Whoever wins here, we pay their expenses to go to the next bracket and represent us on a national or international level.

Why isn’t the mainstream media talking about this more?
Endres: I think they are—that it’s starting to build. Just watch ESPN these days. HBO’s “Real Sports with Bryant Gumbel” did a segment on it. It’s the largest underground community you’ve never heard of.

Why did you switch from being players to business partners?
Endres: Paul and I have been friends since the eighth grade. We’ve always played video games—“Halo 2” was a favorite—and we got good at it. Too good, it turned out, at the college level because we’d win all the time. We decided to enter a professional-level competition, and that’s when we realized that against those guys, we were just subpar. But we still wanted that pro experience. That’s what we can do here at eSports Arena that no one else is doing: provide a stage for the amateur gamer.
Ward: Back in 2012 we saw how things in the eSports industry were progressing. We felt it was time to get the idea rolling. We took some business courses, then the next big thing just kept happening. Like this building. It found us.

The historic Ramona Building found you? Do tell.
Ward: Initially, we were looking more south, in Irvine, for large open spaces. Then our broker put us in contact with a property owner that was just about to buy a building and was looking for a business that attracted lots of people. We got together and took a tour of downtown Santa Ana and fell in love with the area and the location.

Some soccer moms and Little League dads might say eSports are not real sports.
Ward: During a recent interview, I was asked if I had any kids—I do—and would I want them to spend all their time on video games. My answer was, sure. You can put your 15-year-old into soccer or baseball, but odds are they’re not going to attain a spot in the big leagues. Here we give them another type of opportunity. To do something they’re good at, that they’re interested in doing, and, most important, a chance to prove they can succeed. And if they do, odds are there’s a spot for them in a pro tournament. It’s not so out of reach.
Endres: We had some kids in here one time, playing a five-against-five match. One of the moms was standing behind him with her phone, filming him play, just like parents would at a soccer game.

But can games of the imagination really prepare someone for the real world?
Ward: The value in any sport is competing at a very fast pace, and that’s true of video games. They teach you how to work within a team, how to problem-solve, strategize. You have to make decisions and make them quickly or, hey, game over.
Endres: Paul used to be in the military. When we compete, we discuss strategies before and after a match, what worked, what didn’t. Very much like a business meeting. These are skills that go a long way in the professional field. You play; you learn to strategize.

And you guys still play, right?
Endres: We have a lot of long days, often into the night. For us to take
a break and play a few rounds really helps keep up morale. Plus, it’s important to try a new game so we can talk about it with our customers.

How much to get into the arena?
Ward: We’ve set it up similar to a gym. We offer unlimited access for a membership fee, just $13 a month. We’re open seven days a week.

Why come here and not a computer cafe?
Endres: We’re the only ones providing a place where gamers can come and go and have a sense of community. The goal for Friday nights is more for social gatherings. We bring in local bands, musical entertainment. We want our customers to feel they can come here and be who they are—nerd or not.