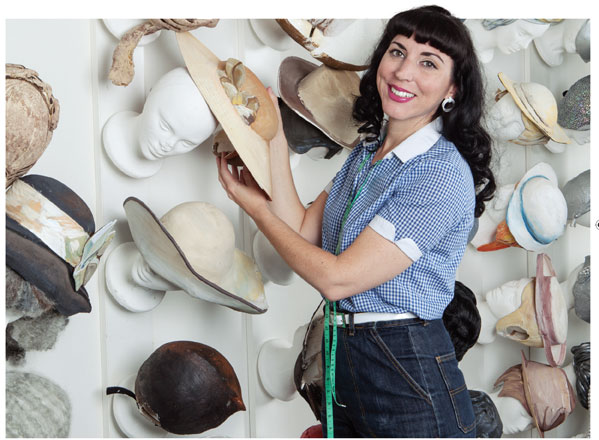 Foy keeps all heads on straight at Laguna Beach’s 80-year-old Pageant of the Masters. That’s because she’s in charge of creating the headpieces for this iconic summer show. With the help of 13 volunteers, the 33-year-old Huntington Beach resident makes 130 to 140 pieces a year so the cast members can become perfect living pictures. “Sometimes there’s light or shadow in a painting, and I think, ‘What is this weird stroke on their head? Is it hair flying, or a highlight, or a hat?’” Her job requires a mastery of proportion and perspective—and lots of pantyhose.

What do you use to create headpieces?
A lot of nylon—essentially pantyhose. I cut the [waist] part to make caps to contain the hair, and I use the legs in headpieces. I also use buckram, a milliner’s fabric, and muslin. Fosshape is a craft fabric I can mold or make hard and flat with steam.

How do you begin?
I fit a buckram cap to a cast member. I apply shapes, typically made from Fosshape to start building up the shape of the hair in the original [artwork]. At this point, I would do a hat [fitting]. If the person in the painting has long hair I use muslin fabric cut in the shape of the hair—this keeps it two-dimensional and we can control it easier than using real hair or a wig.

What happens right before the curtains part?
I do the final check of makeup and costumes. We’ve had moments where we’ve had to fix something—we’ve had costumes on backward—but it’s a well-oiled machine.