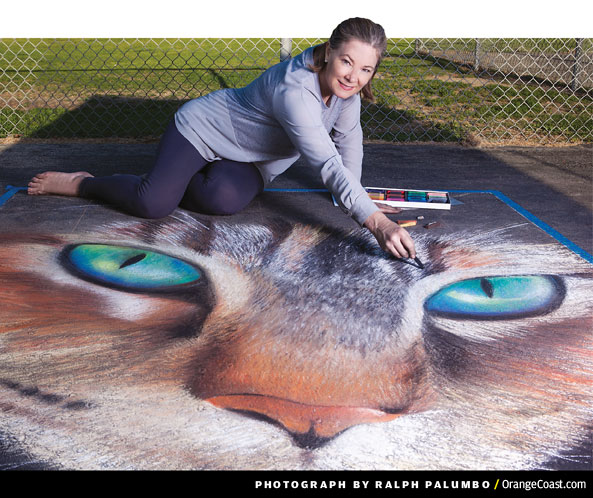 Between teaching art classes at Newhart Middle School and working on her popular watercolor paintings, the 58-year-old Mission Viejo resident and former gallery owner puts pastel to pavement, creating massive, temporary works that easily can take as long as 20 hours to complete. A co-ordinator for the city’s May 3 and 4 Arts Alive & Street Painting Festival, McFaul says she loves getting instant feedback from the public as she works.

What’s the reaction?
People love it but can’t handle the fact that it will be washed away. But it’s performance art—it’s not about the end result.

Memorable creations?
At the international festival in Florida, I worked with a friend on a montage of Klimt, Botticelli, Munch, and Van Gogh. There was a storm drain in the middle of our square—yikes!—so we made it look like water was whirling down it.

Is it physically demanding?
I do yoga so I’m in pretty good shape, but those squatting muscles get sore at the end of the day.

What if it rains?
Actually, it’s not so bad. The top layer may come off but you just wait for it to stop and get back to it.

Street painting began in Italy, right?
Yes. Last summer I went to see the madonnari paint in Florence, hoping to join in, but they don’t let just anyone paint. I ended up giving my box of chalk pastels to an artist who was running low. He was thrilled!

See Her Work!
For its theme this year, Arts Alive celebrates the ’70s. cityofmissionviejo.org/artsalivefestival

Photographs by Ralph Palumbo
This article originally appeared in the May 2014 issue.