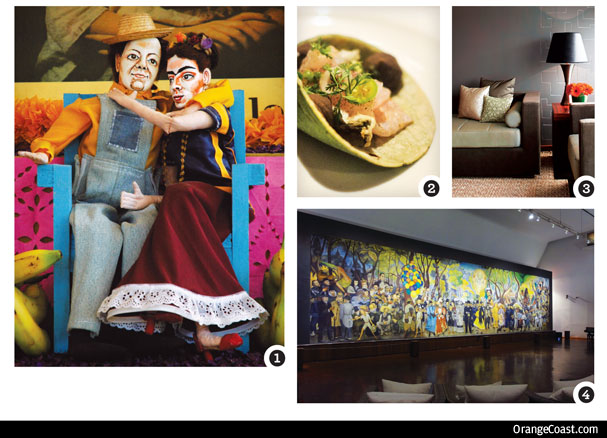 With February comes the pressure to celebrate—or the freedom to ignore—Valentine’s Day. Whether you’re blissfully paired, or happily flying solo, journey to the city that celebrates the lives and works of a romantic couple for all—Frida Kahlo and Diego Rivera. The artist duo famously married, cheated (he with her sister; she with Leon Trotsky), divorced, and remarried throughout their volatile 25-year relationship. Their compelling professional and personal lives have lost none of their allure, and their legacy is preserved in museums and historical sites throughout the city—including the duplex where they lived side-by-side, but separately.

See
La Casa Azul is the Kahlo family home where the artist was born and spent her final years. Turned into a museum ($6) and shrine after her death, the house is decorated with her vivid Mexican folk art, and artifacts of her years there with Rivera. Joined by a walkway, their 1931 home studio duplex in San Angel is a museum ($1) and modern architectural landmark. The 17th century hacienda of Rivera’s model and mistress,Museo Dolores Olmedo Patiño ($5.50), displays 140 pieces from throughout his career. Also don’t miss the Museo Mural Diego Rivera ($1.50).

Relax
The 35-room Las Alcobas boutique hotel ($250 to $2,850) in upscale Polanco is a jewel box of contemporary design and soothing travelers’ comforts, including two sophisticated restaurants and an Aurora Spa. The neighborhood also features Latin America’s first W Hotel($279 to $3,500). In an ode to Kahlo and Rivera, the hotel is saturated in color—lime hallways, cherry bedrooms, and red glass partitions in the restaurantSolea.Feel like an avant-garde artist as you watch the ceiling-mounted TV or lounge in your guest room’s hammock—slung within the huge shower.

Getting There
Interjet, which arrived at John Wayne Airport in 2012, offers two daily nonstop flights to Mexico City. Round trip: $409 and up