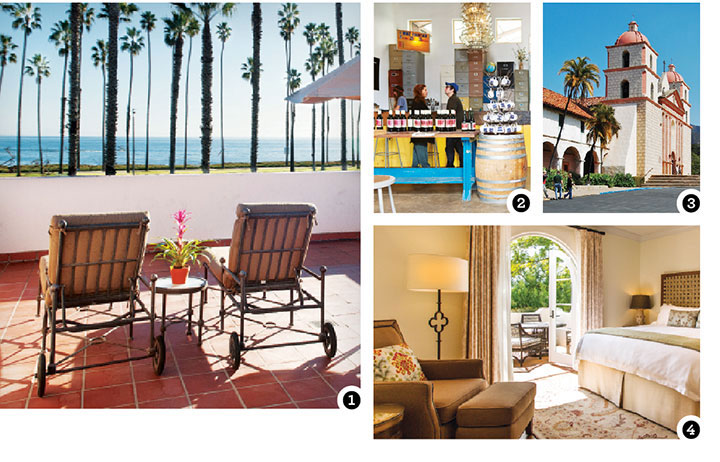 Just being outdoors is a pleasure in breezy, scenic Santa Barbara, where every vista includes the shimmering Pacific or the golden faces of the Santa Ynez Mountains. With Amtrak’s Pacific Surfliner delivering passengers near the heart of town, it’s easy to leave your wheels behind for an adventure on foot. Outdoor festivities crowd the city calendar this month, starting with over-the-water Independence Day fireworks along West Beach. Reach beyond the city’s Spanish heritage and join in its celebration of all things Gallic at the free-admission French Festival on July 12 and 13. The poodle parade is a rite not to be missed.

See
The 30-acre, parklike grounds of the Santa Barbara Zoo (free to $15) house more than 400 animals and make for a relaxing walk. For a fee, you can feed the barnyard animals, the giraffes, or ride one of the minitrains. Join Trek Travel Bike Tours for a four-day spin ($2,200) to visit local sites, including Solvang. Or get arty in the Funk Zone, a growing artists’ enclave of galleries, restaurants, bars, and tasting rooms amid downtown warehouses, near the Museum of Contemporary Art. And no visit to the city is complete without a stroll through Old Mission Santa Barbara (free to $8) on a self-guided or docent-led tour.

Taste
Grab a map to the Urban Wine Trail for a baptism in Central Coast wineries, such as Fox Wines, AVA Santa Barbara, and Au Bon Climat. Clustered downtown, the city’s 22 tasting rooms are architecturally interesting—note the up-cycled chic of Municipal Winemakers: stacked filing cabinets and a bottle chandelier in a repurposed warehouse. With a menu categorized as farm, ranch, and ocean, the lark ($10 to $38) offers a seasonal taste of the region; fried Castelvetrano olives stuffed with goat cheese ($9) pair with a Santa Rita chardonnay. Or enjoy New England clam chowder ($7.25) with the locals at the harbor-view Brophy Bros.

Relax
Fresh from a remodel, the 360-room Fess Parker Doubletree by Hilton Resort ($259 to $570) is perfectly situated for beach strolls. Wander its lush 24 acres, or watch the sunset from your balcony.
A boutique hotel with 122 oceanfront guestrooms, Hotel Milo ($260 to $514), the former Hotel Oceana, sits in the heart of West Beach between Stearns Wharf and the harbor. Borrow one of Milo’s beach cruisers for a roll down wide city streets and nearby bike trails. Nature comes to your door at the Belmond El Encanto ($575 to $1,640), the upgraded 1920s resort where bungalow suites sit in a private garden.

Photographs: 1. by Austin Marcel Sosa 2. by Cara Robbins 3. by David McSpadden 4. by Macduff Everton
This article originally appeared in the July 2014 issue.