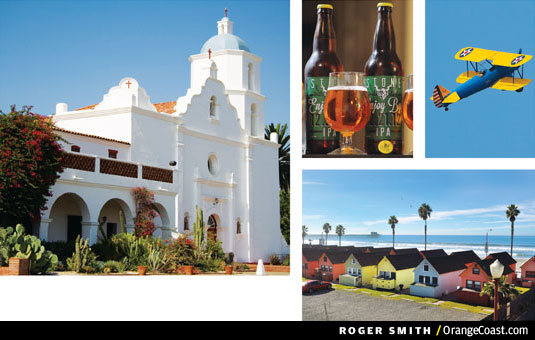 Just across the San Diego County line, this city with a beachy vibe and a small-town feel is giving its neighbors another reason to visit. It marks its 125th birthday with fireworks the night before the nation celebrates its 237th. On Independence Day, downtown will host a craft-and-produce market with more than 150 vendors, kids activities, and music. Stick around to visit the “king of California’s missions,” immerse yourself in surf culture, or kick back with a picnic beside the longest wooden pier on the West Coast. Learn more about this city of 169,000 on one of the Oceanside Historical Society’s free summer guided history walks the second Saturday of the month.

SEE
Step back to 1798 at the Mission San Luis Rey de Francia, the largest and perhaps most picturesque of California’s 21 missions. Linger in the museum, the ancient cemetery, or the beautifully restored church. Dive into surfing history, culture, and art at the California Surf Museum, which has exhibits on board designs, shark-bite survivor Bethany Hamilton, and the legendary Windansea Surf Club (free to $5). And get a bird’s-eye view of the San Diego County shoreline in  Coastal Aero Scenic’s restored 1941 open-air biplane ($99 to $265). There’s a seat for two in front of the pilot.

TASTE
With breakfast served all day at the 101 Cafe,the oldest continuously operating cafe on Coast Highway, there’s no need to rise early. Clever menu names—Two-Lane Special, Pile Up, Blue Highways—make ordering fun ($6 to $9). The fun continues at Killer Pizza From Mars, a parlor plastered with sci-fi memorabilia. The veggie pie is called Cozmik Wheel ($9.50 to $25.50). This month the  Stone Brewing Co. marks the one-year anniversary of its tasting room and beer emporium. Sample the 20 rotating beers on tap in 4-, 8-, and 16-ounce servings ($1.50 to $5.50), or take home a growler ($5 to $15).

RELAX
About a dozen national chains offer easy-on-the-wallet lodging, but the Wyndham Oceanside Pier Resort ($129 to $400) offers a mix of standard rooms and condolike suites with kitchens, balconies, and as many as four bedrooms. It’s also within walking distance of the pier, downtown attractions, and the train station. For a big dose of quaint and cute,  Robert’s Cottages are the itty-bitty circa 1928 bungalows on the sand that rent by the week ($1,115 to $1,338). Beach Front Only offers 50 vacation housing units from one bedroom to 10 ($99 to $299).

Getting There
Avoid the traffic and take Amtrak’s Pacific Surfliner. It rolls into downtown Oceanside for $34 to $42 round trip from various Orange County stations.