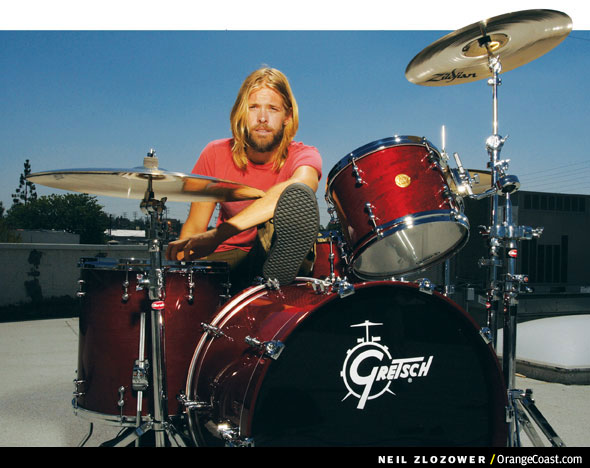 When he’s not playing for the Grammy-winning Foo Fighters, the 41-year-old who grew up in Laguna Beach rocks out with the cover band Chevy Metal. Formed in 2002, the dirt rock ’70s-’80s group plays songs by bands its members grew up listening to, including Black Sabbath and The Knack. “It’s kind of like if guys get together and play poker, or go on a fishing trip, except it’s a band.” He says the group, which performs at local events such as Costa Mesa’s recent 60th anniversary celebration, is a party on stage. “It’s all just a goof, you know?”

You’ve said that Chevy Metal is like a really bad wedding band. Ever actually booked a wedding?
No. We’re so bad we’ve never been asked to.

Why would the Foo Fighters’ drummer start Chevy Metal?
There’s no pressure. You get up on stage with Foo Fighters where you’re expected to be this great band, and so you put a lot of pressure on yourself. When you get up with a cover band like Chevy Metal … every other song we [colorful expletive] up, and that’s OK, you know?

Grammy night. Your favorite band is headlining. The drummer is ill, and they ask you to sit in. What band is it?
Probably The Police.

And why the drums, anyway?
They just seemed to naturally be something that I could do. I didn’t really have to give it much effort.

If Chevy Metal is a party onstage, what do you guys do after a performance?
Drink a lot of water. I sweat my ass off, you know?

This article originally appeared in the September 2013 issue. – See more at: http://www.orangecoast.com/dining/reviews/2013/08/28/main-course-wineworks-for-everyone#sthash.IOCcINXG.dpuf