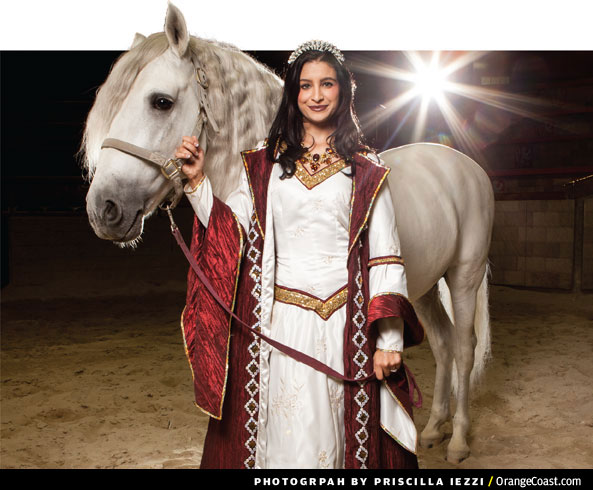 While everyone else at Medieval Times was staring at the jousting knights, a teenage Pellegrini spent her first visit with her eyes on the throne. Then, six years ago, she became one of the four actresses who alternate as Princess Catalina, “the fairest lady in all the realm,” at the Buena Park attraction. But life’s not all tournaments and tiaras for the 25-year-old Buena Park native—she also works full time in customer relations at a local car dealership, and studies broadcast journalism at Cal State Fullerton.

Seems you have a lot on your plate.
It’s funny because this job has helped me with public speaking, which is great for working in customer relations and broadcast journalism.

What’s your role in the show?
There’s this bad guy who tries to bribe the king with a horse so he can marry me. I have a bad feeling about it so the king declines. The knights have their usual tournament, and the winner battles the bad guy. It’s a lot of fun.

So your character doesn’t ride a horse?
I do ride as a hobby, just not in the show. But I definitely would be interested in learning stunts.

Perks of being a princess?
There’s a part where I choose a little girl to be the Queen of Love and Beauty. After one show, the girl’s mom told me her daughter was so happy to have had a moment to shine.

Favorite knight?
I know who is going to win each night, so you might guess the winner based on who I’m flirting with the most.

See Her!
Pellegrini performs most weekends at Medieval Times Dinner and Tournament in Buena Park. medievaltimes.com/buenapark