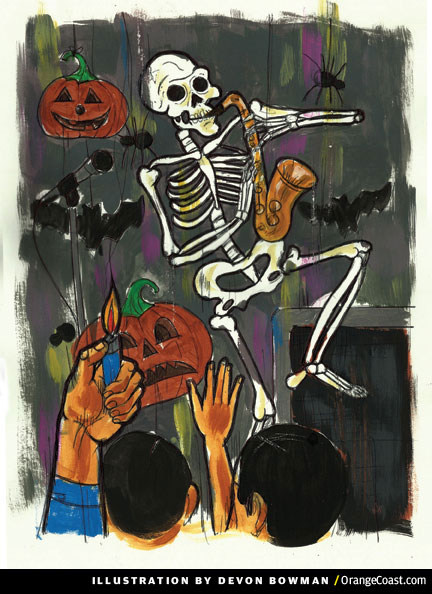 Q: What’s your favorite Orange County Halloween tradition?
A: Halloween concerts of the ska-infused new wave octet Oingo Boingo were a tradition from the 1980s until their final show in ’95. At the height of the band’s popularity those shows were at Irvine Meadows, now Verizon Wireless Amphitheater. Band leader Danny Elfman, now known for movie scores, belted out peppy songs such as “Dead Man’s Party,” and costumed revelers danced through shows that lasted for hours.  Some band members occasionally still do shows as Johnny Vatos Boingo Dance Party. But Elfman says he’s done with concerts, citing partial deafness from years of loud music. We’re hoping advances in Weird Science eventually will restore his hearing.

Q: Orange County old-timers all seem to know one another. But I can shop at my local market and not recognize a soul. Why is that?
A: At the end of World War II, the county had a population of 175,000. People who have lived here since then often know one another—or at least know of one another. The postwar boom hit O.C. hard, and by 1963 we had more than 1 million residents. Now we have nearly 3.1 million! If you feel anonymous today, just wait until you’re an old-timer and we’re all piled into high-rises.

Q: Does Buena Park’s Silverado Days have anything to do with Silverado Canyon?
A: Not really, but it sounds appropriately Old West-ish. In the late 1950s, Buena Park’s downtown merchants, threatened by new shopping centers, borrowed a page from Knott’s Berry Farm and tried to give downtown an Old West makeover. For emphasis, they changed their annual “Home Town Days” festival into “Silverado Days” with a parade, barbecue dinner, square dance, and rodeo—and everyone in town dressed like cowboys and cowgirls for the week. More recent additions include carnival rides and contests, including horseshoes and hog calling. Proceeds from this year’s festival, Oct. 18 through 20 at Peak Park, will benefit local charities. Sadly, there is no “Buena Park Days” festival in Silverado.