Home Life & Style Stuff We Love O.C. Answer Man: The first capture of a killer whale was in... 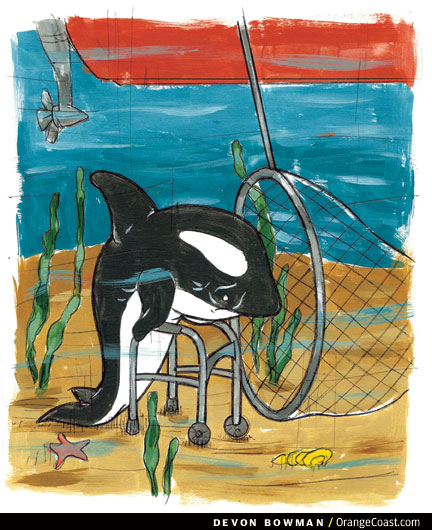 Q: The first capture of a killer whale was in Newport Harbor?
A: True. In November 1961, a team from Marineland of the Pacific on the Palos Verdes Peninsula struggled nine hours to capture an orca that had swum into Newport’s turning basin. About 5,000 locals on shore cheered for the whale to escape, shouting “Olé!” each time she evaded the ropes and nets. But ultimately Wanda, as she soon was named, was hauled ashore, loaded onto a flatbed truck, and driven to Marineland. She lived two days in a large tank before dying of old age, multiple illnesses, and stress brought on by her capture. She wasn’t a troubled menace a la “Blackfish,” only a dying old-timer.

Q: My neighbor says she grew up in Juárez, in Fountain Valley. What is Juárez?
A: Colonia Juárez, across Warner Avenue from Mile Square Park, is one of a number of Orange County subdivisions created in the early 1900s for Mexican-American farm workers and their families. These affordable communities were needed, in part, because deed restrictions kept Hispanics from buying residential properties elsewhere. Others include Colonia La Paz, northeast of Euclid Street and Westminster Avenue in Garden Grove; Colonia Manzanillo, immediately south of Colonia La Paz in Santa Ana; and Colonia Independencia, off Katella Avenue between Anaheim and Stanton. Today, Orange County’s agriculture is mostly gone, but the small-town feel of the colonia neighborhoods lives on.

Q: Have any holidays been invented in O.C.?
A: At least one. About 2008, two Orange County historians (OK, me and another troublemaker) created Talk Like a Grizzled Prospector Day. It’s observed each Jan. 24, celebrating the anniversary of the 1848 discovery of gold that touched off the California Gold Rush. The day also was inspired by International Talk Like a Pirate Day, by a joke from “The Simpsons,” and by the annual Prospectors Day event once held at Knott’s Berry Farm. And all you yeller-bellied city folk gotta do t’ par-tissy-pate is talk like a consarned grizzled prospector, dadgummit!