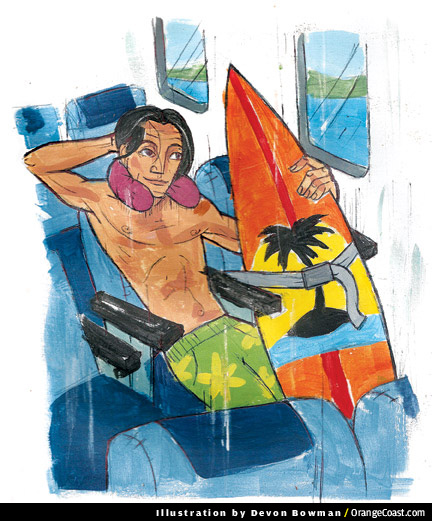 Q: Huntington Beach has two surfing memorials— isn’t that redundant?
A: Maybe so, but the Surfing Walk of Fame and the Surfers’ Hall of Fame have somewhat different criteria and methods for induction. And what’s wrong with having twice as many nice things to say about skilled sportsmen? Anyway, as you might expect from a bunch of laid-back surfers, the rivalry between the organizations on opposite sides of Main Street is pretty friendly. Sometimes, when they honor the same notable surfer, the two split the airfare for the inductee.

Q: What else, other than It’s a Small World, came to Anaheim from the 1964 New York World’s Fair?
A: Disneyland ended up with several attractions it had developed for the fair, including Great Moments With Mr. Lincoln from the Illinois Pavilion, G.E.’s Carousel of Progress, and animatronic dinosaurs from Ford’s Magic Skyway. The Dancing Waters, a German water-and-light show that operated like a pipe organ, was a fixture at the Disneyland Hotel from 1970 into the 2000s. Another European exhibit at the fair, The Wide World in Wax, spent 1966 and ’67 as a stand-alone attraction at 1850 S. Harbor Blvd. Its columned facade now graces the Red Lion Hotel, though it’s not clear where the 100 wax figures from “religious, fictional, and historical scenes” ended up. We imagine Moses wandering around Palm Springs, melting.

Q: The most scenic drive in Orange County?
A: Once upon a time, the Answer Man would have cited PCH between Corona del Mar and Laguna. But now that those hills are covered with faux-Tuscan homes, he’s changing his vote to Trabuco Canyon and Live Oak Canyon roads. For the non-off-roader, it’s hard to beat the winding drive along Trabuco Creek, under the oaks and sycamores, past Cook’s Corner, horse corrals, O’Neill Park, and the Trabuco General Store. It’s a trip back in time, to a less-paved version of Orange County.