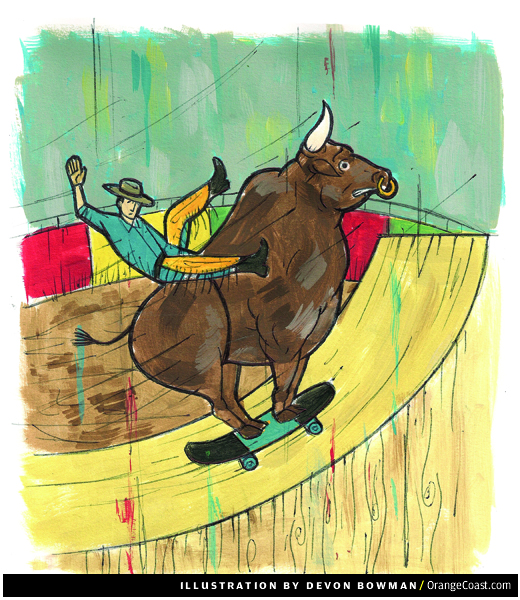 Q: Were rodeos ever held in Orange County?
A: There have been contests of skill among cowboys ever since vaqueros tended the herds of Mission San Juan Capistrano. In the rancho era, rodeos were a regular thing, and that continues today. Last month, the OC Fair & Event Center hosted an “Extreme Rodeo,” which we vainly hoped (based on the name) would involve neon-colored, energy-drink-guzzling bulls riding skateboards off huge ramps. It didn’t. And on Aug. 24 and 25, Rancho Mission Viejo in San Juan Capistrano will host “the richest two-day rodeo in the nation,” which conjures up images of business tycoons herding Beemers around a golf course. But no, these are honest-to-gosh cowboys, and the proceeds benefit local charities.

Q: Is it still cool to call Orange County “The OC”?
A:Was it ever cool? The phrase is rapidly joining leisure suits and aging boy bands as a source of kitschy humor. “The OC,” the 2003-07 Fox teen soap opera—which wasn’t even filmed here—was greeted with a lot of eye-rolling by most Orange County loyalists. But the phrase “The OC” was temporarily a “thing” thanks to awkward would-be-hipsters and marketers looking for faddish, pop-culture shorthand. It’s fine to abbreviate Orange County as “O.C.” (as in “L.A.” or “N.Y.”), but really, who can say “The OC” with a straight face anymore? In fact, the editor of Orange Coast has banned the phrase from the magazine, with the obvious exception of this particular instance.