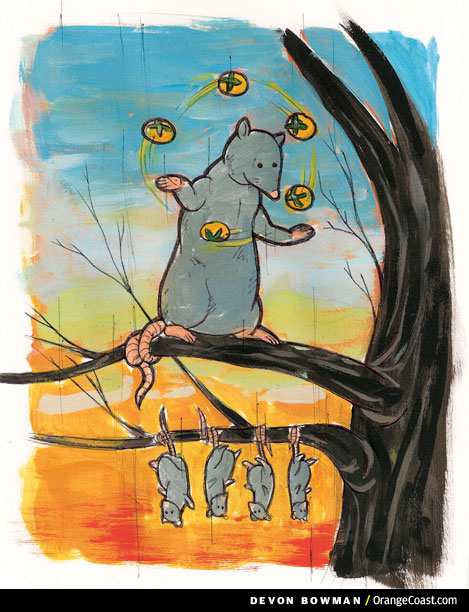 Q: If opossums aren’t native to California, why are they in my yard?
A:The Southeastern native was introduced to California about 1890. Homesick Southerners continued to bring them through the 1930s, both for food and as a source of cheap fur. The critters were skilled escape artists, and soon the adaptable and prolific omnivores ranged across much of the state. Santa Margarita Ranch superintendent Bill Magee introduced opossums to the Santa Ana Mountains in about 1900 when he released a pair he’d bought from a circus in San Juan Capistrano. The marsupial in your persimmon tree is likely their progeny.

Q: Do any local Indian words remain in our dialect?
A:The only one most folks know is “Niguel”—and even it likely was altered to suit the Spanish ear and tongue. Niguel—or something similar—was first used as the name of a spring on Aliso Creek, and a nearby Juaneño village. The name later became attached to the surrounding area and, in the 1840s, to the Rancho Niguel. Much, much later, the rancho’s name was co-opted by various housing developments and the City of Laguna Niguel. Nobody seems sure about the meaning of the word. Given the troubled history of Laguna Niguel’s most iconic building, I’m guessing it may mean “the place where ziggurats become white elephants.”

Q: Why is Laguna Beach the only O.C. coastal city without a pier?
A:The dramatic surf that makes Laguna Beach so scenic also destroyed its many piers. One of the best known was built of less-than-optimal eucalyptus logs in the late 1890s. It began near the current Heisler Park gazebo and extended 500 feet. Rebuilt in 1911, it later was blown down and replaced in 1926 with a 1,150-foot pier. That one succumbed to a 1939 storm, but bits of the pilings still are visible on Bird Rock. The last pier in Laguna, at Aliso Beach, was built in 1971 and required regular repairs until storms in the late ’90s finished it off. Officials finally stopped fighting nature, and Laguna remains pierless.