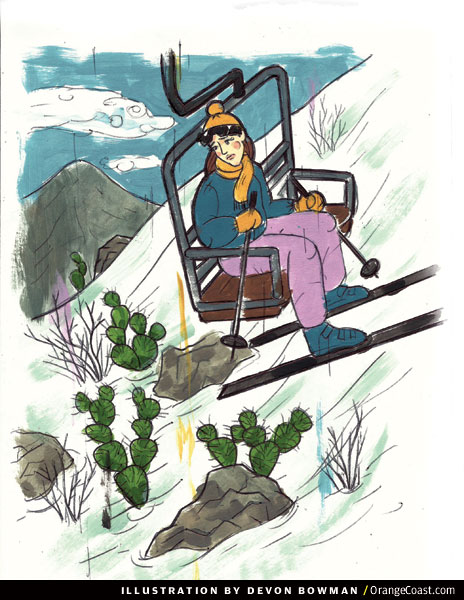 Q: Old Saddleback sometimes gets snow. Can I ski there?
A: Assuming you could find more than a dusting of snow, the slopes of the Santa Ana Mountains are no place for schussers. Seismic activity along the Elsinore-Whittier fault began pushing the Santa Anas skyward millions of years ago, but they’re still comparatively young mountains, full of jagged rock instead of smooth eroded slopes. Also consider the local scrub brush and chaparral. It’s hard to enjoy skiing while constantly doing face plants into cactus and boulders.

Q: Why isn’t the Los Alamitos Race Course in Los Alamitos?
A: It almost was. Two petitions for the annexation of the racetrack were filed Oct. 17, 1955: one from the City of Los Alamitos, and the other from Cypress. According to author Larry Strawther, Cypress offered to forestall a turnstile tax for years and to immediately connect the track to city sewer and water. Los Alamitos made no such offers. Track owner Frank Vessels also may have been annoyed because earlier that year Los Alamitos had blocked his effort to sell 77 acres for a mortuary and cemetery. Vessels signed both sets of papers, but found a way to delay Los Alamitos’, making its petition arrive at the county recorder’s office one hour and two minutes after Cypress’. To this day, the loss of the track remains a sore point in Los Alamitos.

Q: Where’s that place ‘The Real Housewives’ originated, and is it real?
A: Sort of. The average Orange County resident has little in common with the residents of gated and unincorporated Coto de Caza. Likewise, we suspect the average Coto de Cazan has similar trouble relating to the antics of the “Real Housewives.” “Coto de Caza” means “hunting reserve” in Spanish, and a hunting lodge once was part of the planned community. It’s now surrounded by Rancho Santa Margarita, the Starr Ranch Sanctuary, and Riley Park—all of which frown on gunplay. Although a little might boost next season’s ratings.