Home Life & Style Stuff We Love O.C. Answer Man: My brother, a railroad buff, is in town. Where... 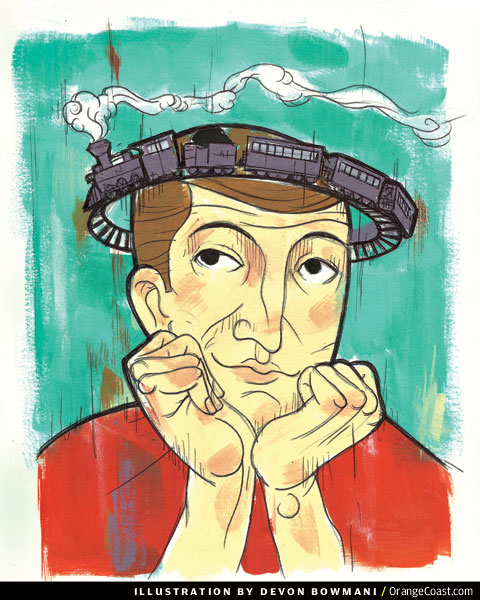 A: Drag his caboose to the Southern California Railway Plaza Association’s annual Railroad Days, May 3 and 4, from 9 a.m. to 5 p.m. at the historical Fullerton depot, 120 E. Santa Fe Ave. This free event includes more than 40 train-related activities and displays, including extensive model layouts and a scenic garden railway. Exhibitors usually include Amtrak, Burlington Northern Santa Fe Railway, Metrolink, and Disneyland. It’ll be choo-choos out the wazoo!

Q: What’s the deal with the Taj Majal building in Laguna Hills?
A: It began as the headquarters of the Rossmoor Corp., developers of the Leisure World communities, which architects Burke, Kober & Nicholais also designed. When the four-story neoclassical contemporary structure at 23521 Paseo de Valencia was built in 1964, it stood out like a sore thumb amid grassy plains and understated tile roofs. Locals soon dubbed it the “Taj Mahal,” and the name stuck. In 1968, investment broker Joseph Dulaney bought the building, but the FBI believed Dulaney was a con man who’d duped nuns and scores of Leisure World residents. Dulaney disappeared, hopscotching around the globe. He was captured in Curacao, but the case was thrown out for insufficient evidence. The building’s current owners have renamed it the Taj Mahal Medical Center.

Photographs by Priscilla Iezzi
This article originally appeared in the May 2014 issue. – See more at: http://www.orangecoast.com/dining/reviews/2014/04/28/main-course-selanne-steak-tavern#sthash.5fxd1DeA.dpuf