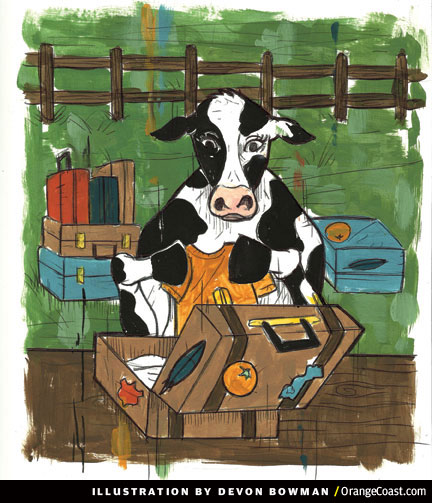 A: The city was created to keep cows in and people out. After World War II, suburban growth pushed many dairies out of Los Angeles County and into rural Orange County. When suburban sprawl caught up with them once more, the resettled dairymen fought against being pushed out again. In 1955, the same year another D-land opened in O.C., they incorporated as Dairyland, with ordinances against residential development. The ploy was short-lived. By 1965, the city’s first tract homes were built and voters changed the city’s name to La Palma, after La Palma Avenue. The cows were sent packing.

Q: How did Dana Point’s Festival of Whales begin?
A: The boundlessly energetic Doris Walker (1933-2011) was Dana Point’s foremost booster for almost half a century. Along with writing the definitive books on the city’s history, and founding the local historical society, she launched the Festival of Whales in 1971 to highlight the brand-new Dana Point Harbor and mark the annual return of gray whales. Today the event includes whale watching, art festivals, street fairs, a parade, exhibits, and contests. This year’s festival will be March 1 and 2, and 8 and 9. Full schedule at festivalofwhales.com.

Q: The Strand shopping area in downtown Huntington Beach surrrounds some old buildings. What are they?
A: They’re still owned and occupied by the descendants of the man who put them there: furniture dealer Matthew E. Helme, a socialist and one of the town’s original council members. His efforts brought paved roads, streetlights, a modern fire department, municipal gas and water systems, and cityhood to Huntington Beach. His house, at Sixth Street and Walnut Avenue, was built about 1880 and originally stood at Fifth and Verano (now Euclid) streets in Santa Ana. Mules were used in 1903 to roll the house on logs to its current location. The following year, he built the M.E. Helme Furniture Co. behind the house. In a city that has bulldozed much of its history, it’s heartwarming to know this house and commercial building, now an antique shop, are on the National Register of Historic Places and are being restored.