Home Uncategorized O.C. Answer Man: How did land-locked Villa Park end up with a... 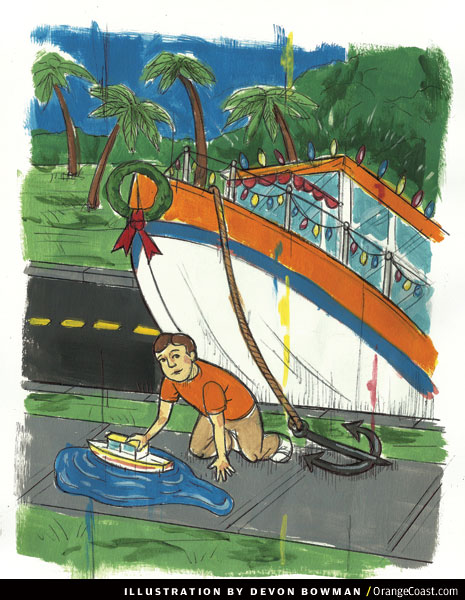 Q: How did land-locked Villa Park end up with a holiday boat parade?
A: In 1981, five teens launched the tongue-in-cheek Villa Park High School Yacht Club. At a 1982 holiday party, one member’s father, Chuck Beesley, expanded the idea by proposing The First Annual Unofficial Non-Sanctioned Villa Park Dry-Land Holiday Lighted Boat Parade, poking fun at Newport Beach’s famous tradition. Some of the hastily decorated entries were pretty motley. But thousands came to watch 38 festooned boats towed through the streets. The event returned the following year, but then fell apart. In 1998, City Councilman Richard Freschi led a successful community effort to revive it. Today, a lampoon of a tradition has become its own tradition. This year’s parade casts off at 5 p.m. Dec. 8, beginning at Villa Park High School and ending at the Towne Centre.

Q: Is that area just north of Laguna Beach spelled “El Moro” or “El Morro”?
A: “Morro” is the correct spelling of the Spanish word for a rounded promontory—in this case, a reference to nearby Abalone Point. Creative spelling led to both versions appearing on early maps. Historian Don Meadows wrote about “Morro Bay” and the adjoining “Moro Canyon,” splitting the difference. He noted that “Moro” is now the traditional name for the canyon. As for the cove, both spellings have vocal proponents. I’ll stir the pot by mentioning that the area also historically is known as Scotchman’s Cove.

Q: Why do the straight, parallel streets in Tustin and Costa Mesa become diagonal streets when crossing Newport Avenue?
A: Blame the Mexican governors of early California. The shift is based on the alignment of the Irvine Ranch. Newport Avenue/Boulevard essentially runs along its western edge. The ranch boundary, in turn, paralleled the western limits of the Mexican ranchos San Joaquin and Lomas de Santiago that occupied the same land, beginning in the 1830s and ’40s. Over the centuries, land grabs shifted the boundaries a bit, but the principle remains: Everything’s cockeyed on the Irvine Ranch.