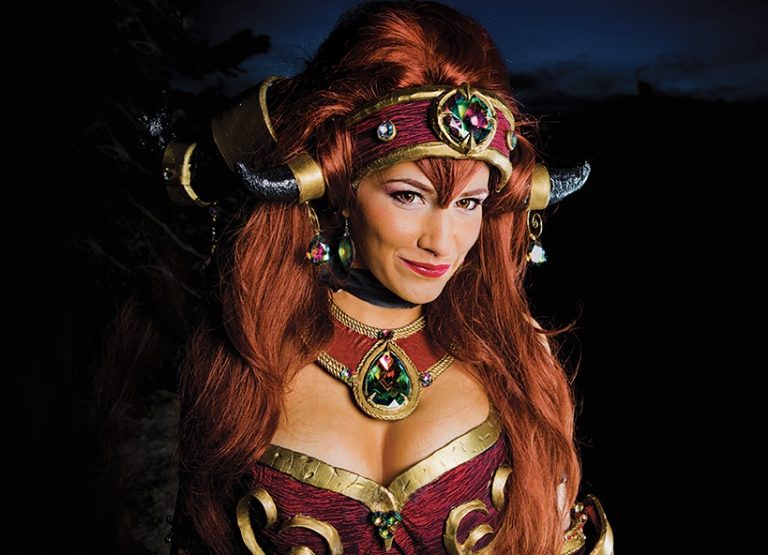 By day, Caitlyn Culpepper works at Harvey Girls Gallery in Seal Beach, where she helps women get their fashion fix. By night, she enjoys World of Warcraft and other role-playing video games. Her love of fashion and gaming will merge this month as she attends Blizzard Entertainment’s gaming convention, BlizzCon. She has crafted a unique costume for the Anaheim-based convention each year since 2008. A self-taught seamstress, Culpepper creates multilayered works of art from gold leafing, silk taffeta, and Swarovski crystals, incarnating her online personas with needle and thread.

How’d you get into gaming?
I used to date a guy who introduced me to World of Warcraft. I was hooked. It’s easy for me to play for up to five hours a night.

What’s your design aesthetic?
Purists make exact copies of their characters’ outfits, but I like to think about how a costume would translate in real life. When I made my Death Knight Troll costume, I got creative. Trolls live on islands, so I braided bones, leather, and wire into the wig.

What’s it like being in costume at the convention?
I use a lot of Advil because the costumes are heavy. When I’m walking back to the hotel, it takes a lot to not rip off my 5-pound wig and colored contacts.

Why don’t you?
There’s a community expectation that you don’t take off any part of your costume in the hotel lobby or the elevator because fans might see you, and you are representing their favorite characters. Everyone takes it very seriously.

Culpepper and other costumed characters will be at BlizzCon at the Anaheim Convention Center on Nov. 6 and 7. blizzcon.com