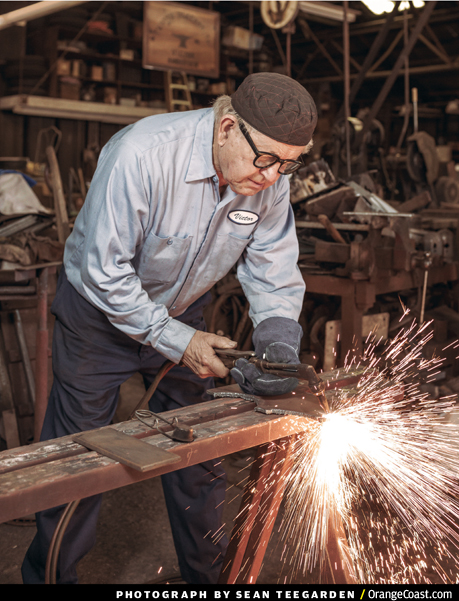 Editor’s Note: We are reposting this story, originally published May of 2014, in memoriam of Victor Andersen, who died last week.

Everything about Victor Andersen seems built to last.

His business, his marriage, his stocky, straight-spined body. The 81-year-old’s handshake confirms the steel- and ironwork he’s done since he was a teen helping his father run the Tustin Blacksmith Shop, a building with pale-yellow metal walls, a peaked roof, and double barn doors on a quiet plot in Tustin’s Old Town.

“Going right on 102 years now,” Andersen says of the business that was established in 1912 and owned by his family since the late ’40s. He’s run the landmark shop for more than half its existence, taking over after the death of his father in 1960.

While blacksmiths are a rare entry in the phone listings these days, the craft lives on through Andersen and a few others—including farriers, who will be around as long as there are horses to shoe. For most of its history and well into Andersen’s tenure, the Tustin shop’s owners stayed busy daylong and into the night, six days a week with Sundays off, shoeing horses and serving farmers and contractors who fed and housed Orange County’s rapidly growing population.

“It used to be all farms around here,” he says. “Farmers are some of the hardest-working people we’ve got, in my book. Good people to work for.”

Most of the work he does now are “little jobs”—fashioning digging tools, a metal coil to hold a fishing pole steady, blade-sharpening, some welding. He also repurposes old blades, attaching them to wooden handles to make garden hoes. But in the blacksmith’s heyday, he produced work on a much larger scale, including several large flatbed trailers that transported tractors from field to field.

Andersen’s past is on permanent display, reachable and reviewable in the sprawling, metal-strewn shop. A camper shell winched into the rafters once transformed his family pickup into what he wryly calls a “station wagon,” for fishing trips to the Colorado River. He still has the truck, too: The white ’59 Ford F-100 with blue trim and new tires is parked next to the shop.

A toolbox his father built as “a young’un” and a pair of gas-fired forges tended by his father sit stolid and ash-black a few steps from the tiny, room-for-two office lit by a small window high on the street-side wall.

Andersen pushes his chair away from the office desk, leaving the remnants of the lunch his wife packed, and steps out to squint into the light that washes in gently from the double doors. He pauses, and smiles.

“We was living next door,’’ he says, referring to the adjoining building now occupied by a dance school. “Dad put in a little apartment; two bedrooms and a bathroom. We was there about three years.” He gestures toward the other side of the street, to the large parking lot overflowing with SUVs belonging to workers at the Tustin Unified School District buildings. “I could set in the apartment and hear the bell ring, ’cause the elementary school I went to was right across the street,” he says, laughing. “That was handy.”

The business originated at Third and B streets, Andersen says. But—so the story goes—a neighbor, the matriarch of one of the city’s most prominent families, objected to “the smell of the hot shoe on a horse’s hoof” emanating from Tom Wilson’s Blacksmithing and Shoeing Shop. Soon after, the business and its objectionable aromas moved a block away to 245 S. C St., and eventually passed into the hands of Andersen’s father, who’d relocated his family from Colorado to Tustin in late 1944.

“Everything we had fit in a two-wheel trailer,” he says.

Andersen started working for his father as a teen, then was drafted and served in the Army during the Korean War. He met Kathy, the woman who would become his wife of 52 years, during basic training at Stockton, and courted her by mail during his posting in Ulm, Germany. “I married a good one,” he says, “just like Dad did.”

After the war, he went back to work with his dad, who shouldered the blacksmithing while Andersen did the welding and observed his father’s work on the forge. Andersen and his wife raised a daughter and a son, now 50 and 46, respectively. His son inherited the Andersen gift for mechanical skills, and currently works as a machinist for Coca-Cola.

As light floods in from the street, Andersen conducts a tour through and around piles of metal—works in progress, equipment a century or more old. He comes to a drill press, switches it on, and it instantly revs to a low hum that belies the speed of the spinning bit.

“My dad put that together,” he says, his lingering delight in the contraption evident. “He put a car transmission on it, a 1927 Chevy three-speed. You don’t need 16 speeds or whatever they put on ’em nowadays.” He shifts gears and the drill’s pitch jumps a notch. “Three’s all you need. That’s as good a press as you could ever ask for.”

On one side of a cleared pathway stands a 50-pound trip hammer, the tool that delivers the smashing force needed to shape steel. “I turned that on and it scared the heck out of Huell Howser,” Andersen says of the late PBS personality who filmed one of his travel features at the shop in 2008.

Across the path the forges sit side by side near a blacksmith cone, a solid steel column that comes to a point against which metal fired red-hot is hammered and bent into shape. “You get a piece of hot iron in this hand, a hammer in the other, and go for it,” he says.

Andersen takes a bar from a pile resting against a table, hefting the heavy piece as though it were a broom handle.

“A lot of these have been sold, you see,” he says turning the ribbed piece in his hands, “but that’s a terrible bar. That octagon shape, it tears up your hands when you use it. I make a little better one.” He holds up a smooth column of the high-quality black steel salvaged from oil drilling equipment, which he favors, and smiles.

“He’s remarkable,” says Chuck Bennett, manager of B&B Metals in Santa Ana, which has supplied Andersen for about 15 years. “He’s 81 but he has the mind of a 65-year-old.”

Farmers once kept him busy, but Andersen’s main business comes in today at a leisurely pace.

“Just a lot of little stuff. Some welding work.” He still owns the building next door occupied by the dance studio, which he says contributes enough in rent to offset the decline in the main business.

Andersen is by all measures an upbeat, energetic man, but he recognizes that time and age take a toll. The small round table at the back of the shop where he and his friends socialized gathers dust, because many of them have passed on.

If his past is ever-present, Andersen tends to keep the future at arm’s length. He has no plans to retire. “I’m not a traveler. I like to stay around home. We’ve taken a few trips. But take a cruise and all that stuff? I don’t dig it.”

When he finally decides to close up shop for good, he says, “I’ll let my boy inherit it. Let him do what he wants with it.”

In the meantime, the double doors of the Tustin Blacksmith Shop slide open at 7 a.m. and slide shut at 4 p.m., six days a week, with Sundays off.